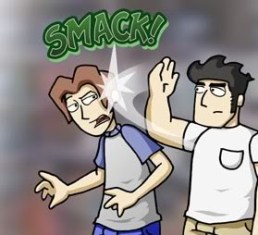 is a Two Gamers on a Couch webcomic, following the adventures of two guys, a girl, and a robot who alternate between sitting around playing video games and getting up to wacky hijinks. Created and written by Tim Buckley (no relation).

The comic alternated its updates between story-based strips and video game-specific ones, until on November 24, 2012 the comic concluded its main storyline, wrapping up the stories of Ethan, Lilah, Lucas, and Zeke

. Following this conclusion, the comic has become almost exclusively video-game jokes, now starring the four colored players previously seen in occasional earlier joke strips. This was used as placeholder content until the main storyline was rebooted, now featuring Ethan and Lucas as a gaming-themed superhero team, with a marked change in drawing style, being much more dynamic and detailed.

There is also an animated adaption, Ctrl+Alt+Del: The Animated Series. Its site is here