No Sense of Direction 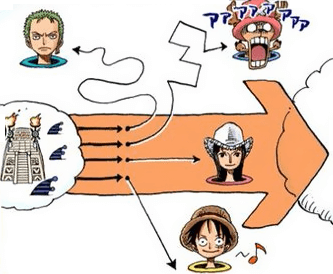 On a scale of Zoro to ten, how would you rate your sense of direction? note Robin is headed south in the right direction; Luffy, not doing too badly for a change, is at least going straight in the direction he thinks is south; Chopper is freaking out and running all over the place, and Zoro... is just wandering wherever he likes with the belief he is always heading south, despite traveling with a living compass.
Advertisement:
"Grrrr!! Not again! This is the 75TH time! I could have SWORN Caelin was in this direction!"
— Wallace, Fire Emblem: The Blazing Blade

A character who has no idea where he's going, and tends to get lost easily.

And not just the regular kind of lost either. They could get lost in a walk-in closet. This person simply has No Sense of Direction.

A little like the Flying Dutchman, except that this character wanders not because of a curse but because he can't find where he's trying to go. Often becomes one of those Achievements in Ignorance when the character somehow arrives at the right place despite their utter inability to get there.

Also see Directionless Driver, when the character actively refuses navigation assistance. Contrast with The Navigator, someone who's skilled with directions.

If the individual is lost because of the location itself being impossible to navigate, it may be a form of The Maze, Magical Mystery Doors, or an Eldritch Location.