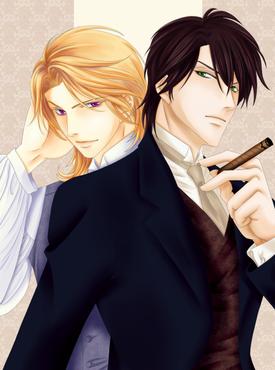 Gorgeous Carat is a Boys' Love manga series by You Higuri (mangaka of Gakuen Heaven), set in Victorian-era France. Currently a four-part series and a one-shot sequel, with more on the way.

Paris is in an uproar over the famous and notorious Phantom Thief Noir, aka usurer Ray Balzac Courland. A penniless aristocratic woman seeks Ray out to help with her family debts, and is forced to give him the only thing she can as collateral—her son, Florian du Rochefort. Their relationship starts off quite rocky, but, this being BL, things run their natural course as the pair go on treasure-hunting adventures, try (unsuccessfully) to fool the private detective bent on proving Ray's identity, and have run-ins with the crime syndicate Black Hand.

The main story is available in English from Tokyopop's BLU imprint, and the Gorgeous Carat Galaxy spinoff is licensed by DMP's Juné imprint.