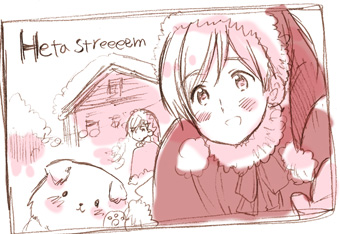 The scene of a Christmas horror-comedy story
Part of a very special holiday tradition that may have made the single largest impact on the western Hetalia fandom in a matter of several days due to the large fanbase and live updates, the 2010 event lasted a grand total of five days and has spawned a Fountain of Memes on the LiveJournal community, until finally receiving its very own page here on TV Tropes.
Advertisement:

Finland hosts a live stream of the Christmas season in the world of Hetalia, answering fans' questions and requests until a mysterious shadow looms over the broadcast. Suddenly, nations begin disappearing one by one and the remaining characters gather together in an attempt to solve the mystery and find the culprit.

You can read the scanlations here

Also has its own Memetic Mutation page.