Slept Through the Apocalypse 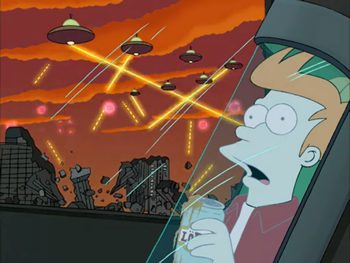 Eh, it's fine; they'll just rebuild it again before he wakes up.note And then they'll destroy it. Again.
"The earth died screaming
While I lay dreaming
Dreaming of you."
— Tom Waits, "Earth Died Screaming"
Advertisement:

Our heroic protagonist, Joe Average, is a very Heavy Sleeper. His friends joke he could sleep through an atomic bomb blast. In fact, he just did.

Thanks to an extraordinary coincidence, Joe was in one of the only (if not the only) safe places from The End of the World as We Know It. Joe will usually wake up and find himself very, very alone, and get increasingly freaked out. That is until night falls and he's relieved to find someone who is Not a Zombie Mutant, and won't try to bash his head open to eat his delicious brain meats, honest! Luckily for Joe, this is when a savvier survivor will bail him out and lead him towards more safety.

There's a lot of ways for Joe and/or Jane to miss the opening act of The End of the World as We Know It without realizing it. The threat itself may be a localized one like a Zombie Apocalypse, and being out in the countryside where there's no cell reception is one way to survive without becoming the wiser. Or they may be naturally immune or in a place where whatever 'it' is can't affect them. A Human Popsicle may thaw to find the world After the End isn't all he expected. And of course, a Heavy Sleeper may be clueless and lucky enough not to realize it's happening until he's knee deep in radioactive weevils.

If the story is a comedy or a horror story being played for laughs, Joe may be killed off pretty quickly without even realizing he was Late to the Tragedy. Otherwise, he'll have a pretty good survival rate as he taps into his inner Action Survivor.

Frequently overlaps with Rip Van Winkle, where the future reality the protagonist finds himself waking up in is strange but not apocalyptic per se. Compare But What About the Astronauts? when someone survived because they were offplanet.

He isn't even aware there's a zombie outbreak happening when he's first encountered. All he knows is that "the help" has disappeared for some reason, and he initially thinks Nick is from a delivery service.

He isn't even aware there's a zombie outbreak happening when he's first encountered. All he knows is that "the help" has disappeared for some reason, and he initially thinks Nick is from a delivery service.