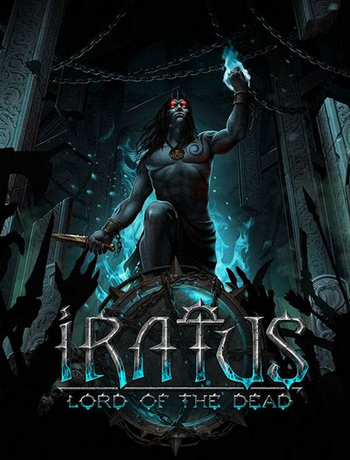 Iratus: Lord of the Dead is a Dark Fantasy Dungeon Crawler Role-Playing Game, where you take on the role of the titular necromancer, who has been recently awakened and now raises the undead minions and sends them out in order to break out from his underground tomb and reach the surface. His undead parties must fight through the numerous patrols of the living, who know very well what awaits them under his reign, and so they confront his horrors through Side View Turn-Based Combat.
Advertisement:

This game was developed by the Russian studio Unfrozen. It was funded

on Kickstarter on June 21st, 2018, and then published by Daedalic Entertainment and released on PC through Steam Early Access on 24th of July, 2019. Even before release it had attracted the reputation of the "reverse Darkest Dungeon", as this time, you are the ancient evil attempting to get free, and which commands undead, interchangeable pawns, while it's the opponents that are now all subject to fear and stress.

See also Vambrace: Cold Soul for another 2019 game Inspired by… Darkest Dungeon, but which went in a more story-driven and Lighter and Softer direction.