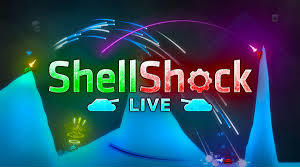 Chilled Chaos: "Think of this game as Tanks meets Worms... except for some reasoning hitting people in this game seems SOOO much more satisfying".
Fight Alongside your Friends! (Or blow them up... we won't judge!)
— Quote from the game's Steam page
Advertisement:

ShellShock Live is an Artillery Game in which your goal is to blast the opposing tanks with your own, using a wide variety of weapons of varying plausibility, ranging from simple shots and air strikes to beehives, magnets, bouncy balls, and much, much more. There are also some RPG elements mixed in, such as levels, upgrades, health and armor, and critical hits.

The game has a primary multiplayer focus, although the Steam version has a single player mission-based campaign.

The original free-to-play version was released on Kongregate on December 15, 2010 and can be played here here

. Its sequel, ShellShock Live 2, was published on November 16th, 2012 and is playable here

. A rebuilt version of the game then entered Steam Early Access on March 11, 2015, and is still being actively worked on