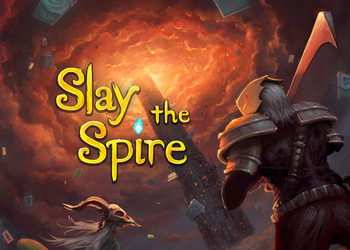 That is the Spire which we have to slay.
"Welcome... back..."
—Neow
Advertisement:

Slay the Spire is a roguelike Deck Building Game, developed and published by an US-based indie game studio in Seattle, Washington known as MegaCrit Games. It follows the story of several mysterious outcasts as they attempt to climb the eponymous Spire, all in the hopes of reaching its heart and destroying its evil influence. This won't be easy, as the Spire is full of cultists, monsters, hostile constructs, and even stranger terrors, all looking to bring your quest to a premature end.

on January 23, 2019 with three fully-playable characters and a daily run mode. On May 21, 2019, the game released for the PlayStation 4, followed by subsequent releases for the Nintendo Switch on June 6, and the Xbox ONE on August 14. A fourth class, the Watcher, was released in 2020. The Watcher would go on to represent the series in Fraymakers.

Not to be confused with The Dark Spire.