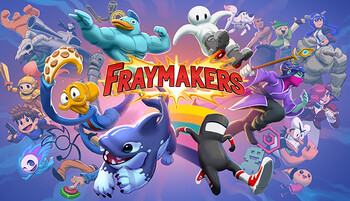 A great fray in more ways than one.

is a customizable Mascot Platform Fighter created by McLeodGaming of Super Smash Flash 2 fame. Much like Indie Pogo before it, Fraymakers stars a robust Indie Game roster with an impressive degree of polish both visually and mechanically. Each fighter possesses a fully fleshed-out move-set of fluid, painstaking animations and deep, high-octane options, chief among them being the ability to summon your choice from a wide array of Assists upon filling your meter.

Certainly makes someone wish they could make something similar, right? Well, in reverence of their own Humble Beginnings, the dev team is also unveiling FrayTools

, the game's very own custom-built and optimized development tool, integrated with Fraymakers free of charge. This tool promises uncapped potential to aspiring content creators new and seasoned through a versatile, easy-to-use, and highly streamlined workshop to create their own custom fighters, assists, stages, and much more, and also share them with the greater Fraymakers community. Better yet, FrayTools' potential isn't limited to Fraymakers thanks to a special plugin system, making it compatible with other game engines and platforms.

Fraymakers is currently set to release August 2022. The Kickstarter campaign

is one of a special few to have reached it's goal on its launch day. As one of the stretch goals, Newgrounds is also hosting an art contest

to tie into the campaign. The McLeodGaming Wiki has in-progress coverage of Fraymakers right here

(with updates and spotlights with further info)