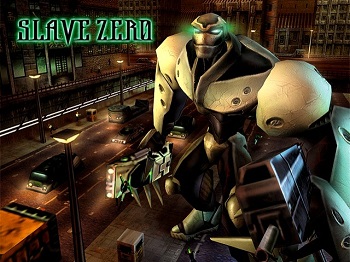 Wherever that car is going, it's not going to end well.
It's 500 years in the future, and the world is ruled by SovKhan, whose base of operations is in the vast city complex known as Megacity S1-9. Out to stop his tyrannical rule is a group of resistance warriors descended from an ancient group of warriors called the Guardians. This fight seems rather one-sided, since SovKhan's forces are bolstered heavily by the use of 60-foot tall biomechanical Humongous Mechas known as Evangeli- sorry, "Slaves", grown from cybernetic embryos and a piece of Applied Phlebotinum known as NTR95879, or "dark matter". However, hope arrives to the guardians by way of a captured Slave unit called "Slave Zero", who is not only the original Slave that all the other slaves have been cloned from, but has also had a resistance member's mind permanently uploaded into its brain.
Advertisement:

What follows is an urban rampage through various assorted cyberpunk cityscapes, with a nice assortment of gun combat, shoulder-mounted missiles, and plenty of terrain destruction.

Such is the story of Slave Zero, a Mecha Game heavily influenced by the style of shows such as Neon Genesis Evangelion. Released originally in 1999 by Infogrames, with development helmed by Accolade, the game was originally marketed on the technology behind Accolade's "Ecstasy" engine, but was a commercial flop in the wake of the game's initially lukewarm reception, and ended up being the only game made with the engine.

The PC version of the game has since been released on GoG by Tommo, Inc., and on Steam by Night Dive Studios.