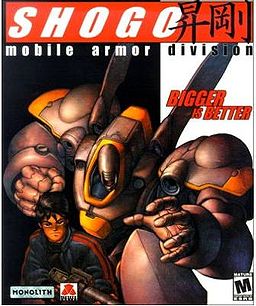 I know we can make it together!
"I've lost too much to this war.
My brother Toshiro.
Kura, the woman I loved.
Baku, my childhood friend.
I can't bring them back — but I can avenge them.
Every rebel CMC soldier and fanatical Fallen terrorist I wipe off the face of Cronus brings me one step closer to peace.
That, and Kathryn, Kura's sister, whom I've been dating for the past several months....
It's kind of complicated."
—Sanjuro Makabe, the game's Opening Monologue
Advertisement:

Shogo: Mobile Armor Division is a First-Person Shooter developed and published by Monolith Productions in 1998. It was notable for being the first game to use the Lithtech Game Engine, which (through various upgrades and tinkering naturally) would later be used to develop other noted Monolith titles such as No One Lives Forever, F.E.A.R., and even the recent Mordor titles. While the game was American-made, its main influence was the Humongous Mecha genre of anime and manga, especially Real Robot series such as Gundam, Patlabor, and Appleseed.

The story follows Sanjuro Makabe, a commander in the United Corporate Authority army, in the war for planet Cronus and its Applied Phlebotinum, called Kato, which makes Faster-Than-Light Travel possible and can be used as a weapon. By the time the game begins, Sanjuro has already lost his brother Toshiro, girlfriend Kura, and friend Baku to an attack by a terrorist group called the Fallen. Sanjuro's commanding officer, Admiral Nathaniel Akkaraju (who also happens to be Kura's father) gives him the assignment of infiltrating the Fallen-controlled city of Avernus and assassinating their leader, Gabriel. However, as events unfold around Sanjuro and he becomes entangled in the agendas of multiple factions and individuals, he suspects that there is more to the war than meets the eye. It goes From Bad to Worse from there...

Gameplay-wise, Shogo features levels where Sanjuro is on foot as well as missions where he pilots one of four Humongous Mecha, which run the gamut from Fragile Speedster to Mighty Glacier. However, the mecha levels play just like a standard on-foot First-Person Shooter, just on a larger scale and different weapons (and a "vehicle mode" which lets the mecha travel faster at the expense of being unable to fire). The game is notable for allowing both the player and enemies to inflict critical hits on each other, which both inflict extra damage and restore the attacker's health.

Shogo was promoted by Monolith as one of the first First-Person Shooter games to focus heavily on story instead of just mindless blasting, and indeed there is quite a lot of dialogue in the game as well as a point near the end where the story progression and final set of levels are determined by a choice the player makes. Unfortunately for Monolith, a certain other game, also featuring an immersive story, came out a month and a half later and most people promptly lost interest in Shogo, effectively killing off both planned expansion packs and any chance for a sequel (although the main story was wrapped up pretty well, so follow-up games may not have been strictly necessary). The game was later rereleased by GOG.com.