You may be looking for Monolith Soft, a subsidiary of Nintendo. 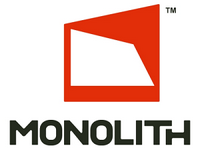 ) is a Kirkland, Washington-based developer specializing in Horror Video Games. Monolith is also known for the development of the graphical game engine LithTech, which has been used for most of their games. Between 1997 and 1999, Monolith also published games, some developed by the studio, some by third parties. The company was founded in 1994 and acquired by Warner Bros. Interactive Entertainment in 2004.

Games from other developers published by Monolith Productions: