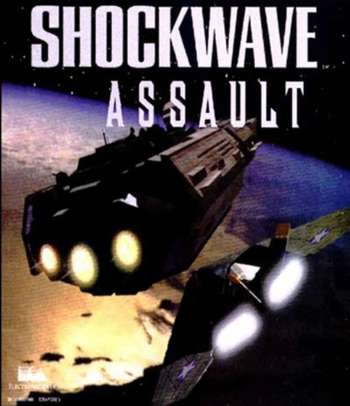 A series of games for the short-lived 3DO. Shockwave: Invasion Earth 2019 tells the story of an alien invasion of Earth in the year 2019. The player assumes the role of a rookie pilot aboard the UNSF Omaha, a space-based carrier putting up the only remotely effective defense against the invaders.
Advertisement:

Shockwave: Operation Jumpgate is an expansion pack to the first game. With the alien invaders staging for a new invasion of Earth on the other planets of the solar system, the Omaha embarks away from Earth to stop the new invasion before it starts, encountering the eponymous jumpgate near Pluto.

Shockwave 2: Beyond the Gate picks up after a roughly two decade Time Skip with a new crew inadvertently becoming the first humans to explore the space beyond the jumpgate.

All three games featured live-action FMV cutscenes. While the production was low budget and the cast didn't have the star power of Wing Commander, the live-action scenes were far higher in quality than in many other games.

The first game and the expansion were eventually ported over to the PlayStation and Saturn, sold in a single box titled Shockwave Assault. A planned port of Shockwave 2 to these systems was cancelled, as it was originally released at the end of the 3DO's short lifespan and as such, sold poorly, but it was eventually ported to the Mac.

Has no relation to the 2017 action film from Hong Kong.