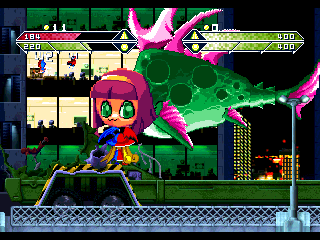 OH SHI-
Silhouette Mirage is an action-platformer developed by Treasure. It was originally released for the Sega Saturn in 1997; a PlayStation version (Treasure's first console-to-console port, subtitled Reprogrammed Hope) was released the next year in Japan, and subsequently localized for the U.S. by Working Designs.
Advertisement:

Years ago, in the colossal laboratory of Edo, genetic experiments produced the twin attributes of Silhouette and Mirage in a child called Armageddon. The twin attributes were opposite, complementary, and necessary for each other's existence, like yin and yang. Yet due to their very nature, they sundered Armageddon into two beings: Hal, who was all Mirage, and Megido, who was all Silhouette. Once started, this split infected all life on Earth. Many organisms were killed by the transition. The survivors were divided into two factions based on attribute, with Hal and Megido as their leaders.

Responding to the devastation, the artificial intelligence Gehena created Shyna Nera Shyna, the Messenger of Justice (although most seem to know her as the Messenger of Destruction), a member of the rare Proteans, beings who combine the attributes of Silhouette and Mirage. Shyna's mission is to repair Edo's computer system and neutralize the two attributes by re-uniting them, effectively reversing the event that created the world as it currently exists.

With run-and-gun elements in which the attribute of attacks, enemies, and other entities plays a central role in gameplay, it could be considered a different-genre analogue of Ikaruga.