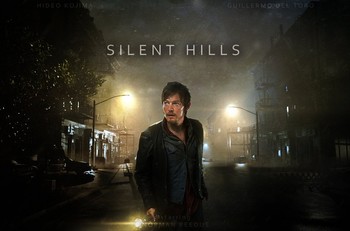 "'My voice, can you hear it? This sign, can you read it? I'll wait forever if you'll just come to me.' Her words - To where do they lead? Be the first in the world to find out." (Avoid playing if you have a heart condition.)
— Game Description
Advertisement:

Silent Hills was a short-lived horror-themed video game collaboration between Hideo Kojima and Guillermo del Toro, featuring an unnamed protagonist voiced by (and modeled after) Norman Reedus. The game was to be developed by Kojima Productions.

Silent Hills was originally announced at Gamescom 2014 with a free, seemingly-unrelated demo called P.T. by upstart developer 7780s Studio, made available on the PlayStation 4 directly after the announcement. Players who completed the demo's cryptic puzzles got to watch a cinematic teaser for Silent Hills, which revealed P.T. to be a "Playable Teaser" for a long-rumored new game in the Silent Hill series.

Thanks to the falling out between Konami and Hideo Kojimanote Kojima had long expressed a desire to move on from Metal Gear only to keep getting dragged back in willingly or not for each game after 2, alongside reports that Metal Gear Solid V had gone massively over-budget (to which Konami had responded with their infamous treatment of Kojima during development such as having him work separate from the rest of his team) and rumors that Kojima hadn't even asked Konami for permission to bring the IP back, distribution of P.T. ceased on April 29, 2015. Konami officially cancelled Silent Hills soon after, then rescinded all digital licenses worldwide for P.T., making the game impossible to re-download (and near-impossible to play) regardless of whether someone had previously downloaded it. Needless to say, fans got pissed — and started an online petition

to convince Konami that it should put the game back into development. Kojima, Del Toro, and Reedus at least would re-partner for Kojima's first project after leaving Konami, Death Stranding. So as things stand now, the "playable teaser" will remain a standalone game.

You can still watch the teasers for P.T.

, as well as tons of in-game footage of P.T., on YouTube.

P.T. and the Silent Hills teaser contain examples of the following tropes: