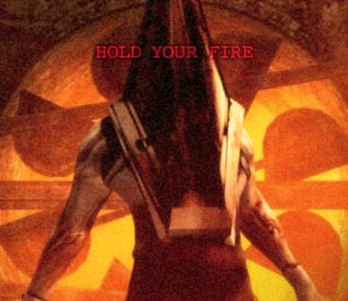 Y-You're kidding, r-r-right?
On a fog-bound November day in 1918, the Little Baroness, a ship filled with tourists, failed to return to port.

A newspaper article from back then simply says "It most likely sunk for some reason".

Despite an extensive police search, not a single fragment of the ship nor any of the 14 bodies of passengers or crew has ever been recovered to this day.

In November 1918, the sightseeing ship Little Baroness disappeared with all its passengers and crew while crossing Toluca Lake, near the little town of Silent Hill. Despite all the subsequent inquiries, no bodies or shipwrecks were ever found. What no one knows is that Hanna, a poor little
Advertisement:
Ill Girl, was thrown overboard by her mother for no apparent reason, and the ship's captain tried in vain to save her before... something pulled the ship underwater.

Cut to 75 years later, where Eric, the 21-year-old great-grandson of the captain, his classmate Tina, and some of their college friends arrive at Silent Hill to investigate the occult mysteries behind the town's legends, while Tina pays a visit to Emilie, a young Internet friend of hers who lives there with her father. As it turns out, Emilie looks an awful lot like Hanna. Needless to say, things go From Bad to Worse.

Breaking from its Survival Horror roots, Silent Hill: The Arcade is a House of the Dead-style shooter spinoff that, while aimed for people unfamiliar with the other games, still features the series's trademark settings, enemies, music, and Multiple Endings, even making rail shooting scarier than usual.