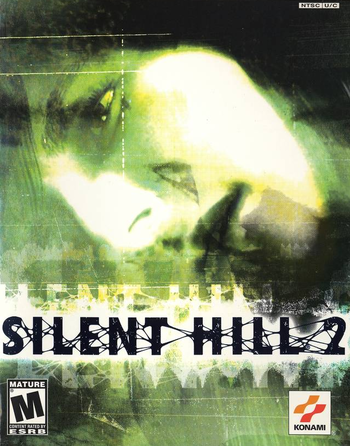 "This town... there's something wrong with it."
"In my restless dreams,
I see that town.
Silent Hill.
You promised you'd take me there again someday,
But you never did.
Well, I'm alone there now...
In our 'special place'...
Waiting for you..."
Advertisement:

Silent Hill 2note A later port for the original Xbox has a subtitle, which differs between regions of release. Restless Dreams is the North American subtitle of the game; Inner Fears is the European subtitle, and Poem of the Last Moment is the Japanese subtitle is a survival horror video game released in 2001, and the second game in the Silent Hill franchise. Despite sharing in the town of Silent Hill as its setting, it is not a direct sequel to the first game (that wouldn't come until Silent Hill 3), but rather a Gaiden Game that nevertheless continues its unique take on Psychological Horror and then some.

James Sunderland receives a letter from his wife, Mary, that begs him to meet her in their "special place" in Silent Hill, a resort town they visited together once on vacation.

He just has one small problem with the letter: Mary has been dead for three years.

James travels to Silent Hill, despite knowing for sure that his wife has died, to find out who wrote the letter and why they sent it. He arrives to discover a seemingly-abandoned town shrouded in a perpetual fog — a far cry from the resort town he remembers. During his exploration of Silent Hill, James meets several people who may or may not have a connection to the letter: Angela, a disturbed runaway looking for her mother; Eddie, a mentally unbalanced young man with a weight problem; Laura, a young girl who seems to know Mary and bears a grudge against James; and Maria, a stripper with a remarkable resemblance to Mary who begs James to protect her.

James eventually discovers that his journey through Silent Hill has a very personal slant, as the town forces him to confront his fears, vices, and guilt via a number of increasingly symbolic monsters, most notably Pyramid Head (a muscular butcher in a pyramid-shaped helmet who stalks James through the town).

Often regarded as not only the apex of the Silent Hill series but a masterwork of horror video games, Silent Hill 2 is well-known for its bleak atmosphere and intensely psychological and metaphorical storyline, alongside its much-improved gameplay compared to the original. The game also has Multiple Endings based on James' general behavior throughout the story (rather than on specific choices at certain junctions).

Silent Hill 2 offers up these tropes; they're waiting for you: