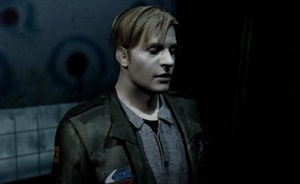 Mary... could you really be in this town?

The main protagonist, a store clerk who comes to Silent Hill after getting a letter from his deceased wife, Mary. The plot kicks off when he arrives at the town to solve the mystery behind said letter. 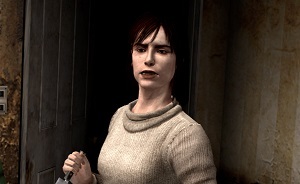 I'm looking for my Mama... I mean my mother. It's been so long since I've seen her.

A young woman James meet on the graveyard just outside of Silent Hill during his walk to the town. She's mentally disturbed and has suicidal tendencies for reasons unknown to James and the player at first. 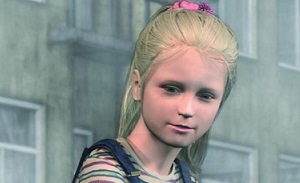 Did I scare you?

A little girl who also came to Silent Hill to find Mary, seemingly all by herself, and seems to have developed a special hatred for James, acting antagonistically towards him at first. 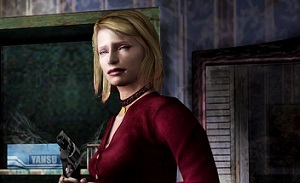 A beautiful woman who bears a striking resemblance to James's late wife. He meets her at Rosewater Park as he continues his search for Mary, and occasionally he'll have to escort her around town as she chooses to help him, if only to have some company. 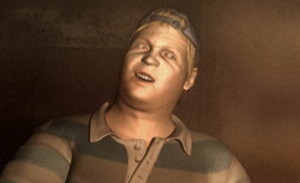 A seemingly harmless young man whose many, many issues only serve to remind the player that James isn't exactly the epitome of sainthood, either. As the game progresses, Eddie becomes increasingly unhinged, and it's hinted that it stems from his own issues with repeated abuse. 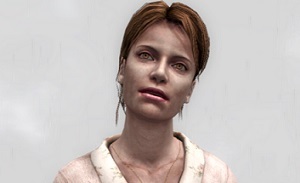 James' beautiful wife, who tragically died three years ago of a terminal illness. Or did she? 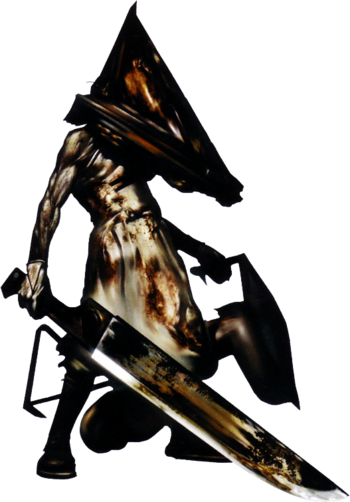 A strange man-like figure with a giant triangular headpiece that hounds James and Maria, and seems to be pretty much indestructible. It carries a large blade, the Great Knife, that it drags behind itself at nearly all times, the sounds of its scraping along the ground echoing throughout James' journey in the town.

Easily the most iconic monster in the whole franchise, Pyramid Head has become a series staple, featured in several other Silent Hill products, including the movie duology and other games in the main series, as well as spin-offs such as The Arcade. 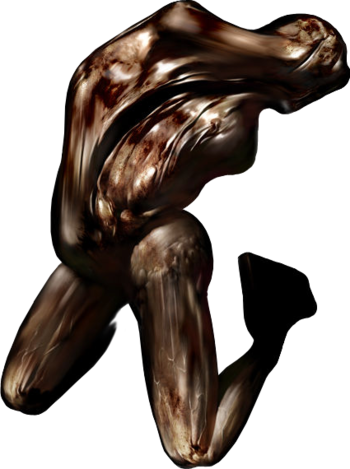 Bizarre, feminine figures whose arms are trapped inside a straight jacket made of skin. The most common enemy in the game, they can spit acid at James if he gets too close. 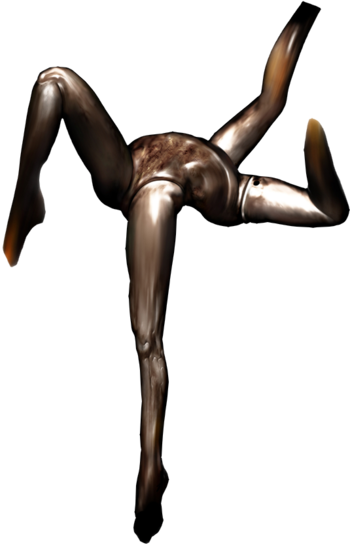 Unnerving creatures resembling store mannequins... But with a second pair of legs where arms and a head would go.

Shambling, twitchy female figures wearing sexy nurse outfits that lurk in the dark hallways of Brookhaven Hospital. Like with Pyramid Head, they're one of the most iconic monsters in the franchise, with most of the games afterwards including a nurse-like monster like these.

Abstract creatures resembling masses of flesh inside box-like bed frames suspended from the ceiling. They first attack James when Laura locks James inside a hospital room in Brookhaven. 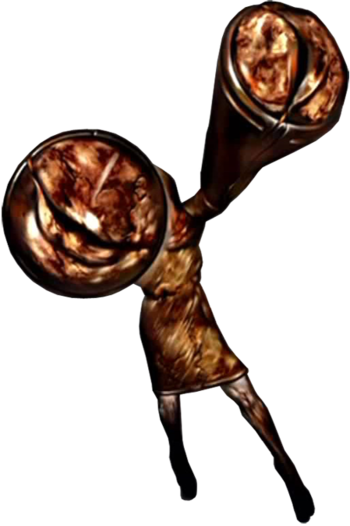 Long-armed, brachiating monsters that swing beneath the metal gratings opening into yawning darkness. 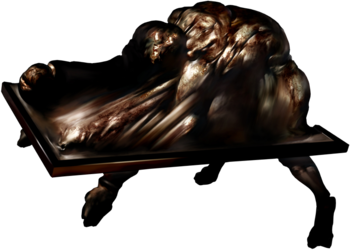 A repulsive creature resembling two squirming figures atop a bed, covered in a taut layer of rancid skin. Unlike the other horrors present in the town, this creature comes not from James' subconscious specifically, but Angela Orosco's. 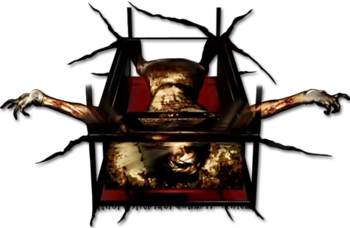 The game's final boss, the last obstacle in James' way towards the end of the road, whichever that will be for him. This is the monstrous form assumed by either Maria or Mary, formed by their respective reasons to hate James depending on the player's actions throughout the story.

Walter Sullivan
A nightmarish murderer whose story is told through collectibles and backdrops of the game. In this game proper, what we know is that he brutally murdered two kids, Billy and Miriam Locane, before being incarcerated and supposedly committing suicide. For much more pertaining to this character, see Silent Hill 4.
Ernest Baldwin

"Some things we forget, and some things we can never forget. It's funny... I'm not sure which one is sadder."

An enigmatic shut-in that Maria encounters in the "Born From a Wish" scenario. He refuses to see her directly, only communicating through doorways.

Thomas Orosco
The father of Angela Orosco. Noted to have a long history with violence and alcohol abuse, he physically and sexually abused Angela all her life, causing her to snap and murder him with a knife. He is represented by the Abstract Daddy monster in the game, although the form he takes to James is noted to be based on his own subconscious.
Mira 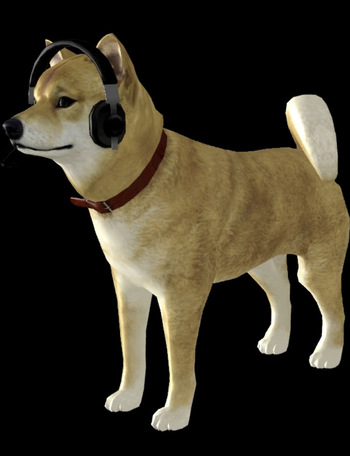 A very smart Shiba Inu, and the force behind the town's numerous monsters. She only appears in the extremely silly "Dog ending".