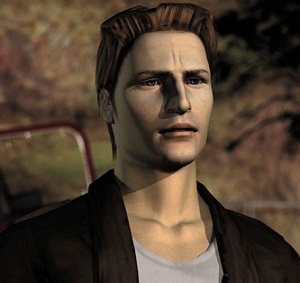 At first I thought I was losing my mind. But now I know I'm not. It's not me.

A writer, widower, and devoted father who crashed into Silent Hill after seeing a girl crossing the road. Having lost his daughter Cheryl, he searches through the town and its unspeakable horrors to find her. 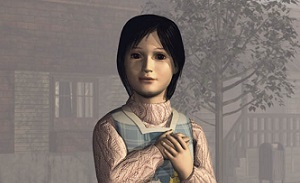 Hey Daddy, do you think there'll be ponies there? I wanna ride a pony around, just like a cowboy!.

Harry's daughter, just a little girl with short black hair, about seven years old. During a vacation trip the two were going for, she goes missing from Harry's car after it crashes into Silent Hill, making it his mission to find her and bring her to safety. 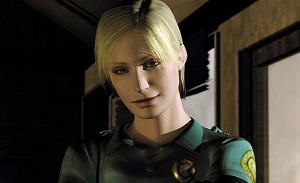 Look, Harry. I really don't get what's going on. But if there's a chance we can save your daughter, I'm in.

A police officer dispatched from the neighboring town of Brahms. She's investigating the strange goings-on in Silent Hill, and like Harry, she's stuck in the town with no way to contact any backup, volunteering to help him find his daughter and a way out afterwards.

Late in the game, she gets possessed by a parasite monster and attacks Harry. You can either save Cybil or kill her, which will affect the game's ending. 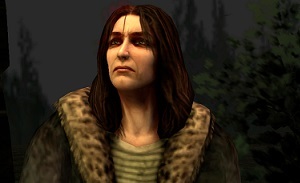 Darkness. The town is being devoured by darkness! Strength must overcome petty desire, childish sleep talk! I knew this day would come...

A strange old woman who asks Harry to stop the birth of "Samael". She's really Alessa's mother and a major member of The Order, the cult that resides in the town. Her goal was to summon a God that would lead all to "paradise", but in doing so, her own daughter burned during the summoning ritual, and she is keeping Alessa alive in constant agony in order to incubate the god inside her. 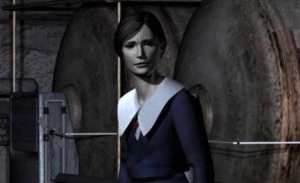 I had a dream. In my dream, I opened a door. But was that really me? I had a different name.

Dahlia Gillespie's daughter, a girl with psychic powers who was venerated by the Order as a saintly figure, both the mother and daughter of their god, destined to bring about its birth through her pain and suffering. Alessa was immolated and kept in pain for years before the events of the game, with said pain ushering in the Otherworld and trapping Silent Hill in an eternal nightmare. 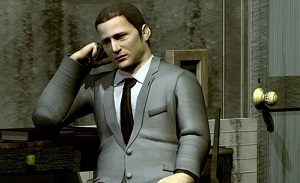 It's too soon to give up. This craziness can't go on forever.

A not terribly pleasant doctor Harry encounters. Kaufmann was a drug runner, working alongside the Order to deal and make PTV under the guise of a devoted follower, but learned fairly quickly that he was being used by them. He's a major antagonist in Origins, and Harry meets him in the first game as he's about done with Dahlia. 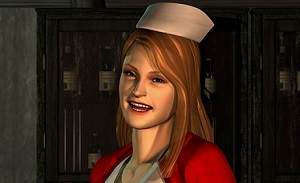 Stay by me Harry, please! I'm so scared. Help me. Save me from them...

A kindly nurse Harry continuously bumps into as he shifts to and from the Otherworld. Though strangely, always in the same location, as she refuses to leave it. She was also Alessa's caregiver after the girl was burned, and as a result, she is somehow kept alive, where all the other nurses and doctors have been parasitized.

Harry Mason's late wife, deceased prior to the first game's events from an unnamed disease.

K. Gordon
"But isn't there something I can do to help?"

A female teacher at Midwich Elementary who showed concern towards Alessa Gillespie's bullying. 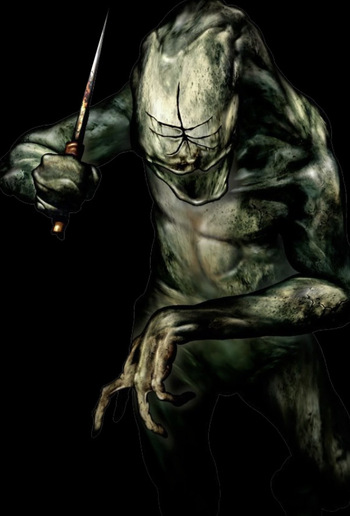 A child-sized, knife-wielding Humanoid Abomination that is typically the first creature Harry encounters. 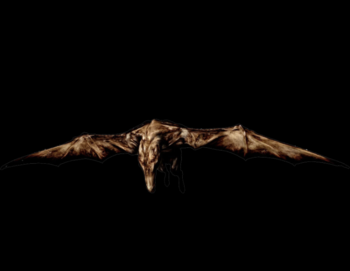 The first monster Harry gets to actually fight back against, the Air Screamer is a vaguely pterodactyl-like bird creature with rotten skin. 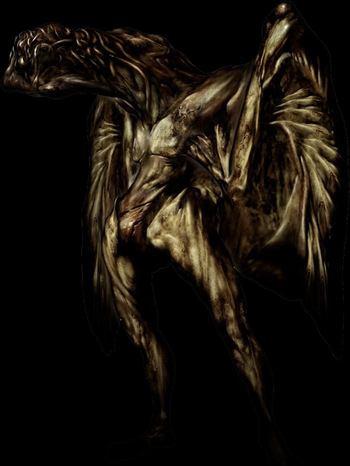 The Otherworld-exclusive counterpart to the Air Screamer, Night Flutters are more humanoid in appearance and have heads covered in worms. 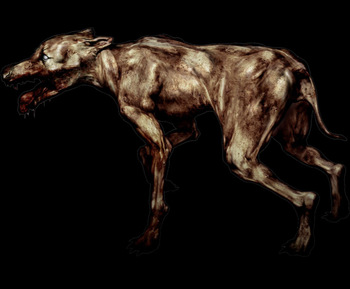 Resembling a rotting, malnourished dog, Groaners patrol the streets of Silent Hill, and will typically hide in the fog and pounce at Harry unless the player can pick up on the sound of their heavy breathing. 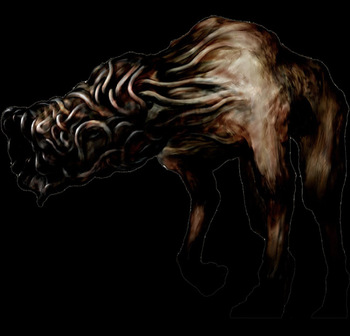 The Otherworld-exclusive counterpart of the Groaner, Wormheads are slightly larger canine enemies with their heads completely covered with squirming worms. 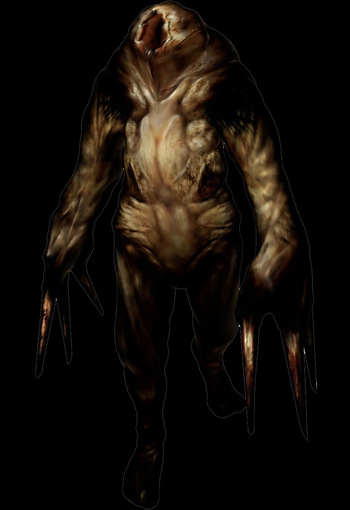 Vaguely humanoid, grotesque monsters with giant holes where their faces should be and three gigantic claws in their hands. They appear most prominently in the European and Japanese versions, where they replace the Grey Children, but still appear in the sewers and Annie's Bar in the American version. 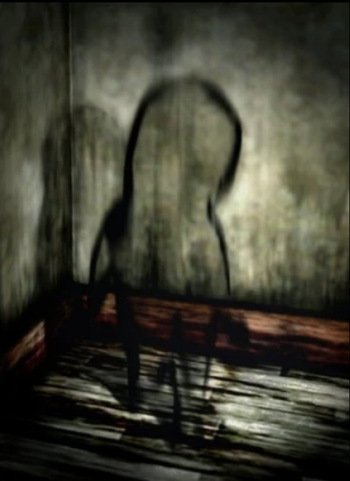 Technically an enemy, but completely harmless and invulnerable, the Larval Stalker is a small, baby-like shadow creature that just waddles around like a newborn and falls over on occasion. They'll disappear after a few seconds. 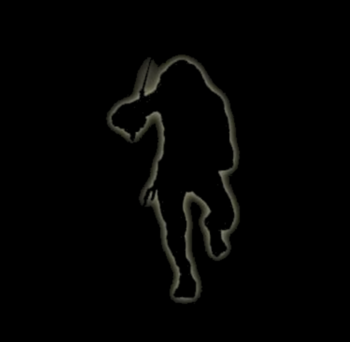 Invisible enemies found in the sewers, supposedly the "mature" form of the previously-mentioned Larval Stalkers. Unlike their possible infant forms, these creatures are aggressive and will attack Harry on sight. 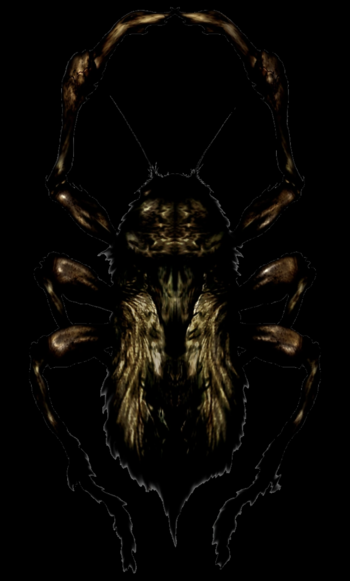 A gigantic, monstrous cockroach, seen often in places that should be full of public activity like Midwich Elementary or Alchemilla Hospital. Creepers will swarm around Harry and attack with their long mandibles, but he can quickly kill them by stomping on them.

They return in Silent Hill 2 as common enemies once again with a slightly tweaked design, and yet again in The Arcade as swarming enemies more often seen during the Otherworld sections. 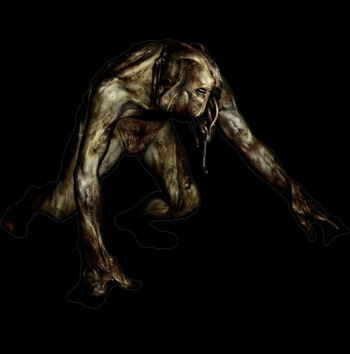 Ape-like monsters with long arms resembling adult men with brownish skin that resembles a coat, walking or "romping" around the streets of Silent Hill trying to attack their prey up-close. 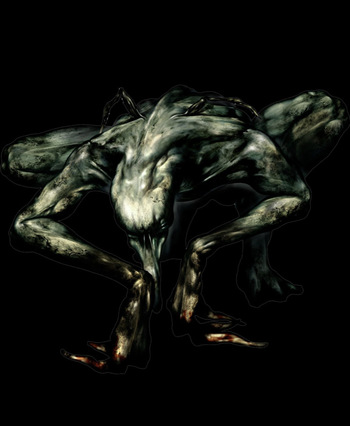 Reptilian creatures that inhabit the sewers of Silent Hill. Also known as Sewer Demons, they'll crawl on the ceiling in an attempt to spring a trap at Harry as he uses the sewers to move around the town. 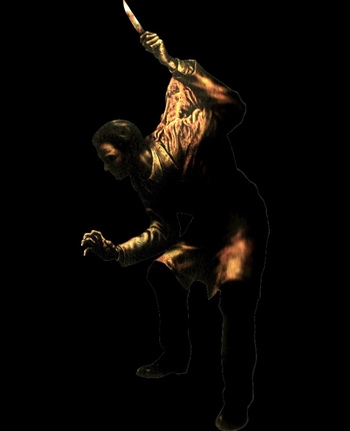 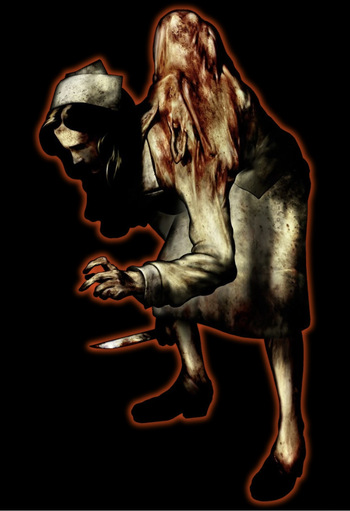 Alchemilla Hospital's staff, who have, with the exception of Kaufmann, all been taken over by a worm-like Puppeteer Parasite, resulting in them having massive red growths on their backs and causing them to hunch over. Acting much like zombies, they attack Harry with knives and scalpels. 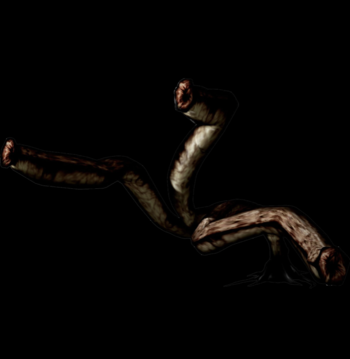 A weird creature only encountered twice, in Alchemilla Hospital and Nowhere. The Bloodsucker is essentially composed of three giant octopus-tentacle-like leeches contained behind a wall, and is immune to Harry's attacks - the only way to get past it is to distract or trap it. 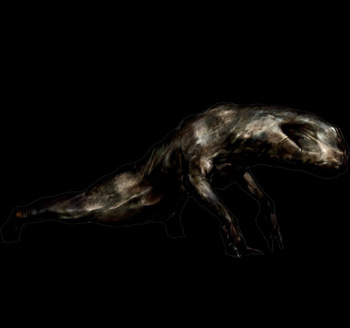 A large reptilian creature with no discernible facial features and a malformed head that, as its name makes clear, can split itself open horizontally to reveal a toothless "maw" of flesh and blood. Harry fights this creature at the Otherworld version of Midwich Elementary School as the first boss of the series. 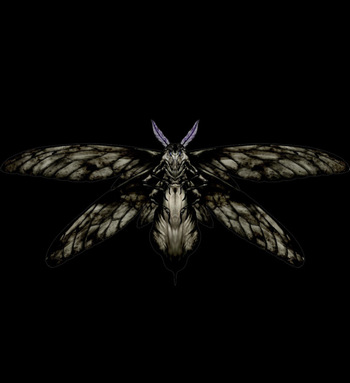 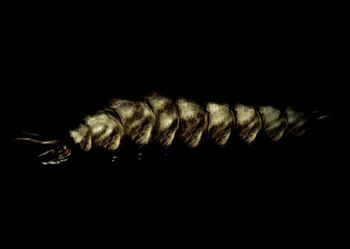 Two versions of the same boss that Harry fights in the public areas of Silent Hill. The Twinfeeler is a huge larva that can burrow into the ground, while the Floatstinger is the creature's adult stage, a giant moth-like creature.

The Order's mythology depicts their God as a seemingly female being who descended to Earth sometime in the distant past and relieved humans of suffering. According to the myth, "God's strength ran out" and then it died. However, before dying, God promised that they would return to Earth if people remained faithful to It. The Order's ultimate goal is the reincarnation of this "God" into the physical world, whereupon resurrection it would bring about "Paradise".

For further tropes pertaining to the god's physical incarnations in other games, refer to the character pages for Silent Hill 3 & Silent Hill: Origins. 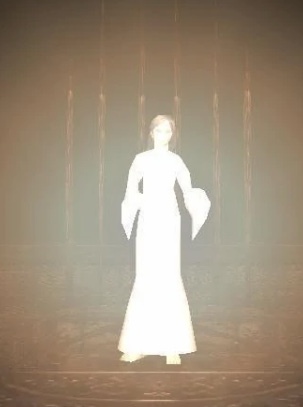 One of two possible forms taken by the Order's God at the end of Silent Hill, only fought if the player didn't save Dr. Kaufmann, locking them into the Bad and Bad+ Endings. The Incubator resembles an adult version of Alessa Gillespie in a flowing white dress and a shining aura around her. 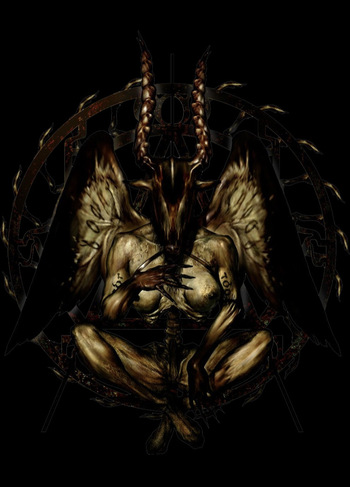 The other possible form of the Order's god that can be fought as the final boss of Silent Hill, only encountered if the player saved Dr. Kaufmann beforehand, locking them into the Good and Good+ endings. This creature, a far more monstrous variation with wings and a disgusting body, is the canonical Final Boss of the original game.

The Greys
"You drive stick?"

Alien creatures from another planet that invade Earth in flying saucers. They're a recurring presence throughout the series as a Running Gag involving the games' secret "UFO Endings".