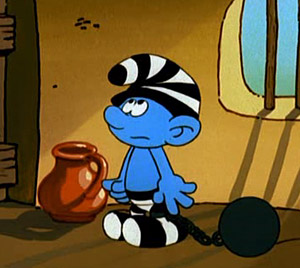 "Who the devil are these guys? The Planaria Gang? Half the city's Municipal Elevator Operators having a club meeting? Those are prison uniforms. Not a wise idea; if they escaped, people would look over their heads, and be unable to give a good description. I — I can't say! I saw his face for a second, but then my eyes were unaccountably drawn upwards."
— James Lileks

(on the prison garb with upward-pointing arrows featured in Dressed to Kill)
Advertisement:

There are a handful of outfits used to identify when a character has been placed in some manner of corrective institution, such as a mental hospital or prison. In the case of both, this trope is usually somewhat justified, because people from prisons or mental hospitals are people who need to stand out from the normal population if they haven't been rehabilitated or declared sane. Unless it's a comic strip or a cartoon with Limited Animation, the trope is, of a necessity, temporary. Crazy people and prisoners who don't want to go back to where they broke out from make it an immediate priority to find clothes that will let them blend in.

Note that the British trope of burglars wearing horizontally-striped jerseys is unrelated, being derived from the jerseys worn by seamen in the Napoleonic period and after. Crime committed by demobilised, unemployed servicemen was a BIG issue in the early to mid-nineteenth century.

For insane asylums or mental hospitals: