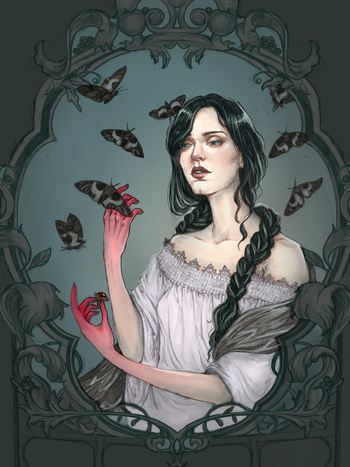 . Used with permission.
You are, always and still, a moth to folly's candle.
— A Bad End ("...don't turn back yet"), Fallen London
Advertisement:

Butterflies are symbols of death and rebirth as well as transformation. But if you take away their beauty and make them nocturnal, you end up discovering the Macabre Moth Motif.

Compared to their cousins, moths aren't well-liked, because moths are very much like the equal and evil mirror images of butterflies — alike in shape, flight and metamorphosis, but unlike in that moths flutter about in the dark, are nocturnal, and weighed down with negative stigma. While butterflies are associated with the image of them dancing among flowers in broad daylight and looking pretty, moths are best known for suddenly showing up on your windows at night, fluttering around lamps and looking all spooky. Moths can thus be used as generic symbolism for Bad Stuff™ whenever the plot needs it. This includes but isn't limited to: poison, the supernatural, Demonic Possession, death, and transformation. They also make a handy animal motif for the occasional vampire for whom bats are too much of a cliche.

This trope is not well supported by Real Life; the biological differences between moths and butterflies are small, with both families containing colorful and drab, nocturnal and diurnal species. When viewed up close, moths can range from being Ugly Cute to just plain endearing, with fluffy bodies, large eyes and delicate, intricate antennae. But, nobody ever let a little science get in the way of a good bit of creepiness.

No relation to Wallet Moths. See also Moth Menace, in which the lepidoptera are actively malevolent instead of just serving as a symbol of bad stuff, and The Mothman.

Note: To qualify as examples they must be intended to cause dread and/or fear by the author and/or the invoking character. This trope is not a more specific Big Creepy-Crawlies focused on moths.