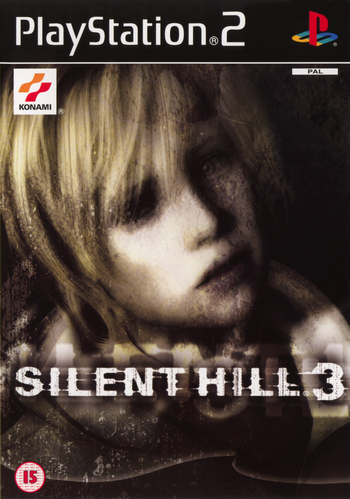 One girl versus a mad, mad world.
"Monsters? They looked like monsters to you?"
— Vincent
Advertisement:

Whereas Silent Hill 2 featured a story divorced from Silent Hill, Silent Hill 3, released in 2003 — the third game in Konami's Silent Hill franchise — is an out-and-out sequel, picking up 17 years after the events of the first game.

During a trip to the mall, seventeen-year-old Heather gets approached by a shady private detective named Douglas who wants to talk to her about her past. Heather shuns him as a stalker and slips away... only to end up trapped within a hellish otherworld populated by grotesque monsters.

Heather struggles to return home and make sense of what happened, but she finds herself stalked by the mysterious otherworld, which corrodes her surroundings wherever she goes. She receives "help" from two people during her quest: Claudia Wolf, a strange woman who urges Heather to "remember who she really is"; and Vincent, an enigmatic preacher with an agenda of his own.

SH1 based its otherworld on childhood and hospital trauma. SH2 based its otherworld on guilt and lust. The otherworld of SH3 preys on typical female (and to a lesser extent, teenage) fears such as unwanted pregnancy, rape, miscarriage, and insecurity, and the story and mood of this game (like the games before it) embrace a theme related to those fears — in this case, helplessness. The story also uses several forms of symbolism related to these themes and their associated fears to drive the story.

The story of SH3 also forms the basis of the story for Silent Hill: Revelation 3D.

"Is this the end? Time to roll the credits."
Feedback

Failing to birth the God of the Order through Heather, Claudia swallows the aborted fetus and births it herself, the God manifests as a grotesque monster.

Failing to birth the God of the Order through Heather, Claudia swallows the aborted fetus and births it herself, the God manifests as a grotesque monster.