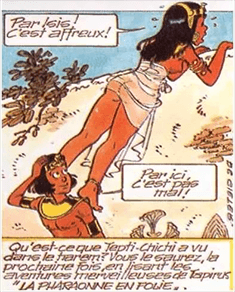 Theti-Cheri: By Isis! What a horrible sight!
Papyrus: Not from where I'm standing!
Advertisement:

As You Know, the Magic Skirt is a trope in place to preserve the modesty of women before the audience. The trope can't be counted on to be in effect in-universe with regards to the other characters. Some skirted female characters are aware of this, and thus this trope.

Basically, any situation where a savvy, skirted woman refuses to climb, scale, ascend, mount, or escalate a ladder or ladder-like device while men are nearby for fear of subverting Magic Skirt, and letting said men catch a glimpse of her panties (assuming she's even wearing any, that is).

She's not always successful. But if she's lucky, not all men in-story are perverts. If it's the cameraman who does this, then it's an example of Male Gaze. Of course, this is often a Real Life concern for women, and part of the rationale behind Modesty Shorts and Proper Tights with a Skirt. See "No Peeking!" Request when they ask the character below them not to look.

The trope's name is a reference to the popular board game Snakes and Ladders (sometimes called Chutes and Ladders).