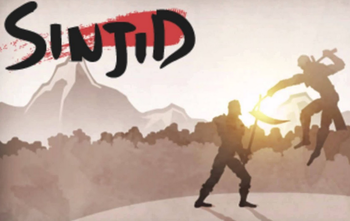 A series of Flash games made by KrinLabs and published by Armor Games, the Sinjid series stars a Ninja named, you guessed it, Sinjid. Each game has its own standalone plot and are not related to each other.
Advertisement:

The first game, Sinjid: Battle Arena, was released circa 2003. The point of the game is to defeat all the monsters you can. The higher difficulty you choose, the more monsters you get to fight. You can go to a shop to buy stat increases for your character, learn new skills from a man in a green cloak, and go to your old master get advice, change your weapons and armor, and use cheat codes. There is little plot beyond battling monsters in a portal.

The second game, Sinjid: Shadow of the Warrior, was published circa 2004. An evil warlord named Lord Baka has ordered an attack on Sinjid's village, and so Sinjid is taken in by a heroic ninja named Fujin and is taught the ways of the ninja by him so he can combat the warlord's Fallen Army. However, he had never killed another man in battle before, and so Fujin sends him to the Shadow Temple and orders him to kill all the warriors in the Human Portal so he can fulfill his task. Like the first game, it is turn-based, and it introduces new mechanics such as a class system, the ability to use items in battle, a hunger system, and a physical/special split.

The third game, simply titled Sinjid, was released in 2013. In this game, Sinjid is falsely arrested for murdering Fujin, and is sentenced to seven years in prison while the real killer remains free. His captor, Lord Masaru, states that the Imperial Empire is at war with the Shogun, and that they need someone skilled enough to have killed the greatest Shinobi to fight the war for them. He promises that Sinjid will be pardoned for his alleged crimes if he cooperates with him, and he sets off on his quest to kill the Shogun's warlords and find his master's true killer. He receives assistance from Scout Eri, a scout assigned with giving him tactical information so he knows what he's going up against. The game uses a real time battling system and is more action-based than the other games, but it retains characteristics of RPGs such as the class system. Unlike the past two games, Sinjid has access to a wide array of skills, some of which are exclusive to certain classes.