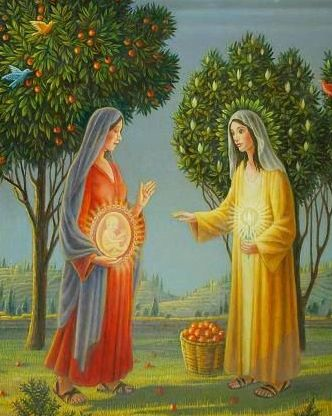 Qui-Gon Jinn: The Force is unusually strong with him, that much is clear. Who was his father?
Shmi Skywalker: There was no father that I know of. I carried him, I gave birth to him. I can’t explain what happened.
— The Phantom Menace
Advertisement:

When a character's pregnancy is complicated by supernatural means — be it Bizarre Alien Biology, Functional Magic, or even through a Mad Scientist. There are three ways this could work:

This trope is a good way to give rise to empowered children; depending on the pregnancy and the supernatural means involved a mother could also birth a Fetus Terrible. However, there's also a large possibility that the phlebotinum involved could kill the mother, as well. A Mystical Pregnancy could result in a Truly Single Parent if conception can be done solo.

Note, however, that test tube babies and other methods not involving natural conception are not examples of this, although some tropes could overlap — such as Designer Babies, which usually involve more "science" and less "magic".

This trope has been around a long time, with weird pregnancies being present in some of the oldest mythologies. However, feminist criticisms of this trope center around both the female character's loss of agency as well as the trope's use of women's reproductive capabilities as a means to terrify, humiliate, and degrade women, or reducing them to a passive set of reproductive organs. If deities are involved, it may raise some interesting questions about whether or not a mortal could truly consent to a Divine Date with The Powers That Be. (Even if no actual sex took place between the deity and the human that got pregnant.) An event as traumatic as a Mystical Pregnancy could tremendously affect a person, but the character's emotional aftermath has rarely ever been touched upon.

In more benign examples, people may pray to (or be blessed by) a Fertility God to achieve this.

Joseph and Mary talk about how she got pregnant.

Joseph and Mary talk about how she got pregnant.