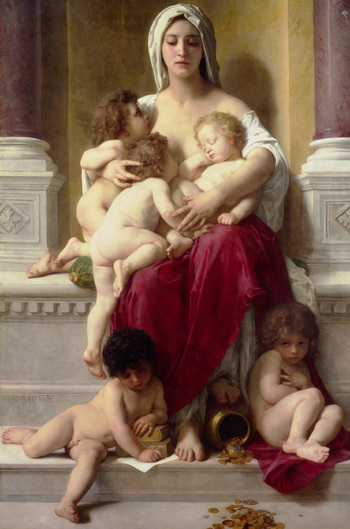 Now now, settle down everyone. You all need to wait your turn.
Advertisement:

"Madonna" comes from the medieval Italian word ma donna, meaning "my lady". It is most commonly associated with Mary, a very prominent figure in the Abrahamic faiths as the mother of Jesus Christ. Since fiction likes to borrow much from the religious culture that it spawns from, there is often Stock Parodies of its most prominent or important characters, like Jesus, Satan, or in this case, Jesus' mother.

The Madonna Archetype character can be any combination of the following:

Sister Trope to Messianic Archetype, Moses Archetype and Satanic Archetype. Compare Mother Goddess, Jeanne d'Archétype. See also Divine Date, Madonna–Whore Complex, Passion Play and Pietà Plagiarism. Not to be confused with the entertainer Madonnanote (though she chose the pseudonym as a conscious contrast to the archetype, so in a fashion, there is a connection).