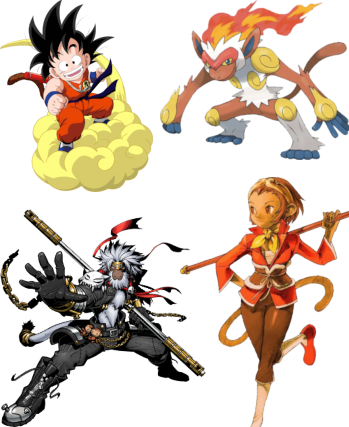 Journey to the West is one of China's greatest epics and it has spawned a lot of derivative works. Amongst the most famous characters is none other than the Monkey King, Sun Wukong. As a result, this monkey king often becomes a stock figure for Eastern-flavored monkey fighters to be based on, often popping up in other places where they're not supposed to be a "retelling" or "derivative" of the epic story. As such, these characters often come without the counterparts of his other companions, Zhu Bajie and Sha Wujing, as well as his master Tang Sanzang (though he tends to be the most recurring character that pops up alongside the Wukong derivative). But if a character is based on this guy, chances are, it would be one badass monkey (yes, this even applies to female characters based on him).

These characters often come with these traits:

For some reason, this trope is excessively popular in online games, and especially the Multiplayer Online Battle Arena genre. If there isn't a playable character based on Sun Wukong, chances are one of them has his outfit as an alternate skin. This can be attributed to the fact that he is a well-known character whose iconic weapon and abilities translate well to a video game hero. Online games are also popular in China, and including a well-known Chinese mythical hero is one way to pander to such a large crowd of potential players.

Not to be confused with expies of the specific character Son Goku from Dragon Ball (himself an example of this trope); there's another trope for that (which Wukong isn't an example of).

Also see Journey to the West's Referenced By page for works that nod to the source in other ways.

With the Monkey miraculous, Kim is able to transform into King Monkey with the power of Jubilation.

With the Monkey miraculous, Kim is able to transform into King Monkey with the power of Jubilation.