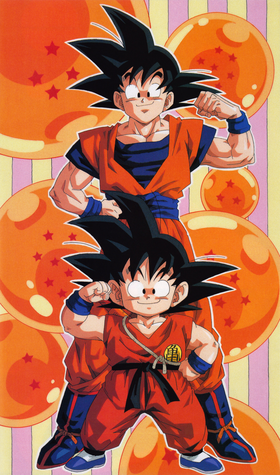 Earth's constant savior who, ironically, was sent to destroy it.

The main character of the Dragon Ball franchise, Son Goku was far from a typical young lad. He was a rather extraordinary child with superhuman strength, a tail and an extreme naivety of the outside world, having never even seen another human besides his (now deceased) Grandpa Gohan. However, when Goku was 12 years old, he met a 16 year old girl named Bulma, or rather she crashed into him with her car. And from that day onwards, young Goku's life would be changed forever.

Making friends and enemies along the way, Goku searched for the Dragon Balls over and over again through the years, dealing with monsters and armies alike. Son Goku is also noticeablely one of the very first characters in Manga history to actually constantly age over the course of the series (Something Akira Toriyama had to fight the higher ups at Shonen Jump Magazine to do), Goku became a teenager, then an adult, married, had children, and even became a grandfather.

Also, he died thrice... But despite all that Goku still remains that adventurous young child at heart.

However, it is eventually revealed that he's a Saiyan, a member of an alien race of warriors who hire themselves out as mercenaries to tyrants who depopulate worlds. And he is among the last four (eight if counting the movies, and canonically five as of Dragon Ball Super: Broly) of his kind. Although originally sent to devastate Earth (though it was later revealed his father Bardock sent him to Earth to escape Frieza's genocide of the Saiyans), he instead becomes the savior of the world multiple times over. Eventually embracing his Saiyan heritage, Goku became the first man in a millennia to become a Super Saiyan. And from that point onwards, he just kept getting stronger...

An influential figure in the landscape of Shōnen manga, Goku is often considered to be one of the most iconic and important anime characters of all time, one of the most popular characters ever in any media, and with the story of his childhood, teenage years, and adulthood delighting audiences for over three decades and counting.