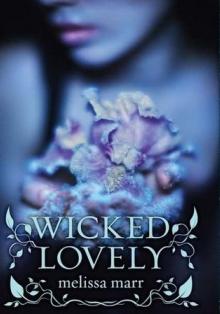 Wicked Lovely is a YA urban fantasy series by Melissa Marr. It consists of a book of the same name (2007), Ink Exchange (2008), Fragile Eternity (2009), Radiant Shadows (2010), Darkest Mercy (2011) and later Faery Tales & Nightmares (2012), a compilation of short stories set in the Wicked Lovely universe among others and Desert Tales (2013), a companion novel about a former Winter Girl.

Aislinn is an ordinary human girl - or she would be, if it weren't for the fact she can see faeries. All her life she's been terrified of them, trying to hide her gift to avoid attracting their attention. But that becomes very difficult when one very powerful faerie starts following her.

Keenan, the young king of the Summer Court, thinks she might be his prophesied Summer Queen. The one who'll save the fae world from the oppressive rule of the Winter Court. And it's not too long before Aislinn is pulled into a world of dark magic, political intrigue, and romance.