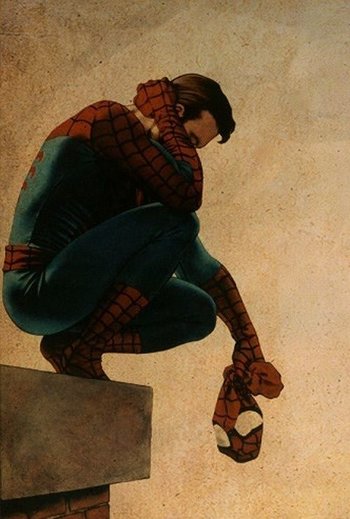 Sometimes, responsibility can be too much.
"In the fell clutch of circumstance
I have not winced nor cried aloud.
Under the bludgeonings of chance
My head is bloody, but unbowed."
— William Ernest Henley, Invictus
Advertisement:

The Iron Woobie is a character who is not just a Woobie; they are the Woobie. Most Woobies are the victim of external circumstance. That may be how it started out for this little guy/girl, but after having to deal with too much guff, they've lost the ability to feel sorry for themselves, and will continue standing in the path of inevitable misfortune. They will Rage Against the Heavens in anger for the ridiculous extent of their trials and tribulations, but when it comes right down to it, they're not expecting the big guy to start doing them any favors now.

Oftentimes the Iron Woobie is also a Determinator, though this isn't an essential part of the character. The chief difference is that a Determinator usually has a specific reason, where as the Iron Woobie can be anyone who bears up gamely to things that happen to them for no discernible reason. Be that as it may, they stubbornly insist on walking the same misfortune-laden path they were on before, and won't give up their personal ethical code just because things continue to go poorly for them.

Different from the Stoic Woobie in that while this character refuses to regret their misfortune, they don't have to hide the majority of their feelings. The Iron Woobie still can show many emotions such as happiness or grief. They probably won't even mention how the universe makes them a Cosmic Plaything.

When their sufferings spring from their heroism, see also the Hurting Hero.

Opposite trope to Sympathetic Sue. Contrast Martyr Without a Cause and Angst? What Angst?, and compare the more snarky Knight in Sour Armor. See also Don't You Dare Pity Me! and Stoic Woobie. Most Inspirationally Disadvantaged characters are portrayed this way, often with insufficient justification and/or to the point of it being their entire characterization.