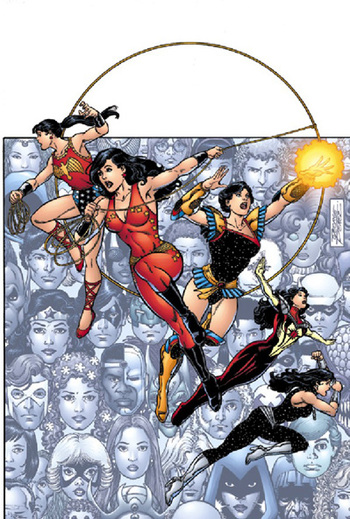 Who is Donna Troy, you asked? Well, that's...complicated.
Donna Troy. Wonder Girl. Troia. Wonder Woman. Whatever the name, she has fallen into so many cases that we can easily call her "Ms. Continuity Snarl". Long story short, the issue at the heart of Donna's continuity is that no-one at DC can (or wants to) decide whether the Wonder Woman title or the Teen Titans title gets the last word on her. There are arguments for both camps; from a historical perspective Donna literally wouldn't exist as a character without Teen Titans canonizing her as Wonder Woman's sidekick, and she's much more well-remembered as a member of the Titans than a member of Wonder Woman's supporting cast, but her code-name and appearance all demand consistency with Wonder Woman's settings. Further complicating things, the Titans drift further from the original premise of "club for JLA sidekicks"note By the late '90s, Young Justice had taken over that specific premise with every reboot; even Nightwing, being a former sidekick, arguably doesn't fit it anymore.
Advertisement: