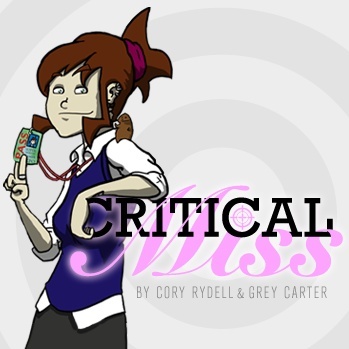 , previously known as Out of Tens, is a gaming webcomic by Cory Rydell and Grey Carter, hosted at The Escapist

. The winner of a webcomic contest hosted on the site in 2010.

The story follows Erin Stout, a game reviewer who writes for the website "Little Miss Critical'', and her co-workers, which include Erin's partner, Elliot Clutch, her boss, Sharon, and a ton of minor characters. Although the comic focuses mainly on video games, a few have to do with movies and various other topics.

A spinoff, titled Erin Dies Alone, has launched. It deals with an alternate Erin who spends her life trapped in her own apartment, with only hallucinations of her favorite video game characters for company. Unlike Critical Miss, Erin Dies Alone has a much darker sense of humor and is more character-based.

Due to the creators leaving The Escapist, the series entered an indefinite hiatus as the site owned the rights to the comic... Until The Escapist came under new management and hired Grey and Carter back on for a new run of strips. However the series underwent a reboot: now called Critical Mix, the new timeline brings in characters from Erin Dies Alone, revamping the entire premise of the series of a world where game characters are real and looking for work. Unfortunately, Grey and Carter were once again laid off from The Escapist in July 2019, leaving the future of the series in jeopardy once more.