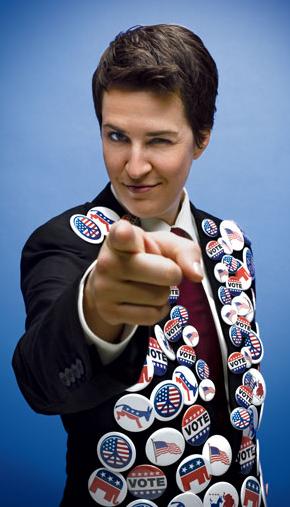 So lovely. So dorky. So about to blow your mind.
"...and thanks to you at home, for joining us this hour."
Advertisement:

The Rachel Maddow Show is an Emmy Award-winning news show on MSNBC hosted by Rachel Maddow, formerly of Air America fame, airing on weekdays at 9PM EST. Like many of its type, it is a blend of news stories and commentary, in this case with a self-admitted left-wing bias and a concentration on military defense and foreign policy. She has also published three books: Drift: The Unmooring of American Military Power in 2012, Blowout in 2019, and Bag Man in 2020.

Unlike her former peer, Keith Olbermann — whose middle name might as well be Large Ham — and many other pundits out there, she is known for her calm demeanor and even-keeled manner, which alongside her dedication to research has earned her a sizable Fandom on both sides of the aisle. She is the first American news commentator who is openly gaynote  though Anderson Cooper of CNN and Shepard Smith of Fox News became news anchors well before she did, they only officially came out of the closet in 2012 and 2017, respectively.

In 2022, the show switched to a weekly schedule with Rachel only appearing on Mondays. For Tuesdays through Fridays, the slot will be called MSNBC Prime, still produced by Rachel's team but featuring different anchors.

The Rachel Maddow Show has examples of the following tropes: