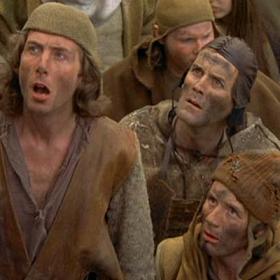 "That woman floats. She's made of wood. Therefore, she's a witch! Let's burn her!"
"Your average peasant had the IQ of an extremely rotten tree stump and the common sense of a very small lump of mud..."
— Top Ten Horror Stories by Michael Cox, explaining how easy it was to convince medieval peasants of werewolves and vampires prowling about
Advertisement:

Whenever you see medieval people in fiction, particularly peasants, they will always be depicted as stupid, small-minded, xenophobic, savage but cowardly, superstitious, gullible, and primitive. And of course, all men treat all women like crap all the time - the Old World equivalent of stereotypical American rednecks.

Thus, time travelers are advised to avoid The Middle Ages (or as we call it, The Dung Ages) at all costs, lest they be burned as witches.

This trope was popularized by the Enlightenment due to the "Medieval Stasis" trope, their perception on the world after Rome as a post-apocalyptic, war-ridden, anti-intellectual dystopia, and how they saw themselves as paragons of progress recovering the glory of the classical world. Of course, reality is more complex than that. Not only did Enlightenment thinkers harbor their own misconceptions and prejudices (some of them far worse than anything previously believed), but medieval people were just as intelligent on average as any other representative person living in any other period of history; they simply did not have the accumulated experience and knowledge that people take for granted when their world includes things like universal education and literacy, plus extensive trade and travel infrastructure connecting them to most other parts of the known world (case in point, do you know how to build a computer?). Basically, unless you were very special or belonged to an organization with some of these features, you had to spend most of your time surviving in a way that didn't require these things.

What's more, The Fundamentalist was actually just as much a Vocal Minority then as now. The Vatican, for example, has actually held to a non-literal interpretation of Genesis as early as the time of St. Augustine (who compared God to a farmer planting seeds to watch them grow), and it is in fact these very writings of his that got him canonized as a Saint in the first place. In fact, medieval Christian monks were some of the earliest proto-scientists, operating under the logic that learning more about God's world would allow them to learn more about God!

Heck, not even The Fair Folk were as widely believed-in as many think they were. For example, that aforementioned St. Augustine guy was once asked how they fit into the Adam and Eve narrative, and his response was "We can worry about that once we know for certain that there are any [Fair Folk]." In other words, they tempered their beliefs with critical thinking and evidence-oriented skepticism.

Occasionally people living in another widely disliked time will get this depiction. The 1950s have long been favorite targets, and increasingly the 1970s and '80s have been getting this too (when it comes to more contemporary issues such as homophobia).

Compare: Humans Are Morons. Also compare The Dung Ages, when the Middle Ages is filthy. The two tropes usually go hand in hand, but sometimes you can have one without the other (and Real Life did; The Dung Ages is far more Truth in Television, as the contemporary sanitation was more often than not inadequate, to say the least). Compare and contrast Stupid Future People. When writers forget one particular aspect that is accurate you get Medieval Universal Literacy.