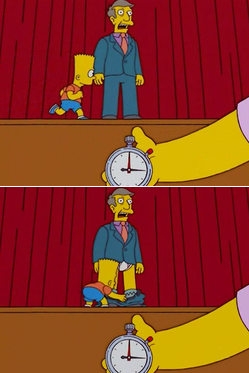 They say that rings that can turn you invisible can turn men into monsters, such a power easy to exploit for personal gain, whether it involves peeking in the girl's locker room or assassinating the king and sleeping with his wife. Imagine what those kind of weak-willed maniacs could do if they could freeze time!
Advertisement:

You will be in and out before they realize you were there. In fact, you could have been there for hours while to everyone else it was less than a second. Your school rival is spending alone time with his Playboy magazine and then suddenly he blinks and finds out that all of his books have been de-alphabetized with his bowl of popcorn turned over his head, his pants around his ankles and he is somehow in the middle of Times Square just as a news camera started recording right where he was standing. Maybe you give someone a Motionless Makeover and cover them with stuff as they're helpless to do anything about it. Whether it is because you move too fast or if you can actually stop the clock, there is no end to the possibilities when you can make Time Stand Still!

Ruby takes advantage of her sister's frozen state to not only deliver a PSA against puns, but also to stick a finger in her nose.

Ruby takes advantage of her sister's frozen state to not only deliver a PSA against puns, but also to stick a finger in her nose.