Tinkle in the Eye 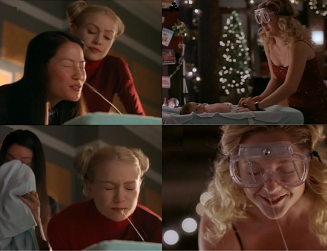 Those protective goggles are really handy!
"I still don't like changing diapers, but ever since Hammie came along my reflexes have really improved."
— Darryl MacPherson, Baby Blues
Advertisement:

Any time Hilarity Ensues because someone without experience is taking care of a baby, you can expect the writers to bring out the horrible and dreaded act of The Diaper Change for quick and easy Toilet Humour. This is frequently taken one step further when the child in question is a boy, since the infant will frequently "open fire" on his caretaker mid-way through.

Truth in Television, as anyone with any significant experience in caring for babies will confirm. Hardly exclusive to boys in real life note Girls can pee upwards and in any direction, too., but in fiction it's only ever really brought up with them since they're the ones with a... um... spout.

Stewie takes a whiz on his dad when he sprinkles paprika on him.

Alternative Title(s): Look Out For Number One, Tinkle In His Eye

Stewie takes a whiz on his dad when he sprinkles paprika on him.