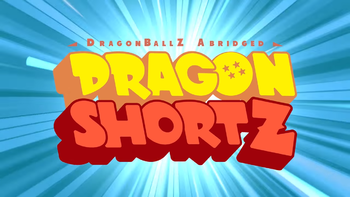 What happened to the Z Abridged-warriors after Cell? Let's find out!
Advertisement:

Dragon ShortZ is a CGI-based animated series being produced by Team Four Star. The series tells the stories of the characters of Dragon Ball — or, more specifically, Dragon Ball Z Abridged — that went untold in canon between the Cell and Buu sagas. Dragon ShortZ is thus much less action-oriented than DBZA, and instead focuses on slice-of-life stories like Goten's birth or Krillin and 18's relationship. The TFS cast reprises their roles.

The series was announced on September 16, 2019 in a TFS Update

On February 1, 2020, Lanipator announced that Dragon ShortZ will replace Dragon Ball Z Abridged as their primary Dragon Ball parody series, as a result of YouTube's ever-stricter copyright policies, and that if the Buu saga were to be adapted it would be via the digital format of these shorts rather than reused Dragon Ball footage. However, a few days later, they revealed that there are no plans to adapt the Buu Saga at this time, primarily owing to the idea being too impractical to put into action and due to heavy creative burnout towards DBZA.

On March 19, 2021, another Abridged-based series, HFIL, began in a similar vein to this series, based around Cell's (after)life in the titular Home For Infinite Losers alongside other villains a year after his defeat.

As with Dragon Ball Z Abridged, this series has a recap page currently under construction.