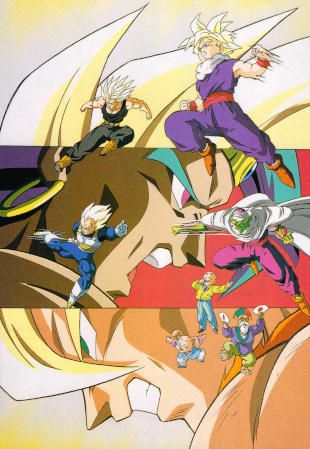 Vegeta is lured to the planet New Vegeta by a group of Saiyan survivors in hopes that he will be the king of their new planet. But when he finds that they have ulterior motives of universal domination, he and the Z Warriors must fight Broly, the Legendary Super Saiyan.

The movie is the debut of Tadayoshi Yamamuro as character designer for the anime of Dragon Ball.

25 years later, it would be revealed that Akira Toriyama himself would be overseeing a Continuity Reboot of the character as the main antagonist of the first movie based on Dragon Ball Super. The movie ignores the events of this film and any of the follow-ups in order to make Broly a proper Canon Immigrant. While elements of the character's past are borrowed from this movie, the film takes Broly in a completely different direction as an antagonist.