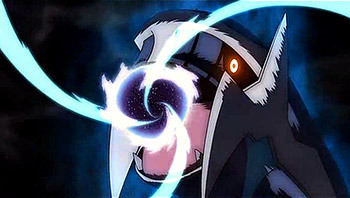 When a powerful spell, weapon, or device is about to fire, it often gives several seconds of warning by dramatically sucking in glowing lines or orbs. Sometimes it is actually gathering and condensing energy or matter from the environment, but not always. A Wave-Motion Gun or Combined Energy Attack will almost always do this. Usually it coalesces into a single glowing ball that is then "thrown" or "spat" at a target when it's Blasting Time.

When a character or object starts to suck in lines, you can be sure it's about to do something massively destructive.

In video games, a weapon often displays this as the visual cue for a Charged Attack, and sometimes continues doing so even when the weapon has reached its maximum power level.

This is a subtrope of Power Glows. Usually not related to Speed Stripes, but is thematically similar. Often paired with Throat Light.

Bowser sucks in lines of energy and releases a powerful blast of fire.

Bowser sucks in lines of energy and releases a powerful blast of fire.