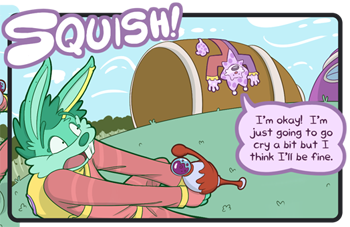 Just another day on the job.

is a Furry Webcomic focusing on the lives of the characters Gayle and Terra in a bizarre world where animal-kin live among monsters, living day-to-day trying to avoid becoming lunch for the larger beasts. Ironically, their jobs happen to be inside the belly of a giant space whale and home to their boss, Kaz the Jester.