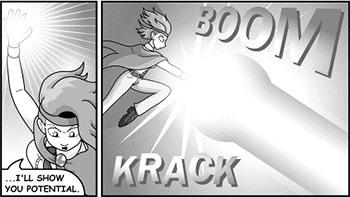 "When Carrie started to get really good at telekinesis, I noticed she used her hands a lot. She was gesturing with them like a music conductor. You know who does that when they use telekinesis? People who aren’t telekinetic. Magicians and crap."
— Film.com, "We Asked a Telekinetic Teenage Girl with a Crazy Mother to Fact-Check ‘Carrie’"

Whenever characters with energy-projecting Magic and Powers want to make a big impact crater, they'll follow the sweep of a clock when firing. Much like throwing a baseball, they will raise their arms straight up at 12, start Sucking-In Lines, then lower one or both arms to 3 (or whatever angle their target is at) and let loose. If the character is very fast, he or she may even "chain throw" Ki Manipulation by alternating charging and throwing between arms, much like a swimmer's strokes.

Similar to the Pstandard Psychic Pstance, this pose is meant to give motion and direction to what would normally be intangible forces and liven up dull scenes. Visually, there's probably also a pragmatic reason for this, as the pose allows the character to generate an Energy Ball or similar of pretty much any size without obscuring their face. If the character doing the attack also floats in the air (and they often do), it can also look threatening in a Death from Above way. In the story itself, the pose is probably justified as being necessary for the Full-Contact Magic, pyrokinesis or Combined Energy Attack to be properly executed, in which case immobilizing the arms effectively stops the attack or forces a misfire.