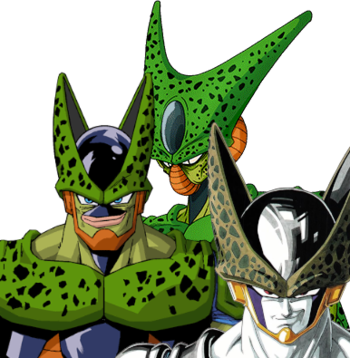 From back to front, Cell's Imperfect, Semi-Perfect, and Perfect forms.
"Actually, leading powerfologists theorize that as you become more powerful, you become more monstrous, and then sharply become humanoid again. They call it the Bishonen Line."
— Karn

As the power of an evil creature increases, they become more of a large, disfigured abomination — until they cross the Bishonen Line, beyond which as they gain more power, they (re)gain humanoid form, or something in between.

The Ultimate Lifeform in particular may progress into a distinctly human form on its way up the Evolutionary Levels, as humans being the "perfect" form naturally follows as a result of Most Writers Being Human. The Monster Lord may also be the result of such a development, where this trope divides leaders and mooks inside a race of monsters.

The humanized monster may possess a Sculpted Physique, which may be applied to "cosmetically" or grotesquely.

A possible In-Universe justification for this is that what's increasing is not only the creature's power, but also how much they control that power — the monstrous, oft-visceral features are the result of power pouring out without restraint. Once the creature manages to get a grip on their abilities, they can suppress the giant-scary-monster aspect of their abilities while freely accessing the kick-ass part. In some cases, this concept will be alluded to via the creature starting to revert to its monstrous form as it is harmed and loses control over itself, or deliberately goes to a new One-Winged Angel level to tap into even more raw power.

In some cases, this could also be viewed as the creature being Functional Genre Savvy. For example, a huge monstrous abomination cannot physically participate in the impressive martial arts stuff that a Fighting Series is built around, so if it's in one of those, it gains an advantage by reverting to a humanoid form that will fare better Kung Fu Fighting.

Also, the creature probably wants to either rule over humans or mock them, and in either case it's hard to have a good Motive Rant when your face makes the humans run screaming. Similarly, it may often see major advantages in having the option of passing itself off as a human, so obviously any kind of monstrous appearance would ruin that.

This trope is also fueled by several out-of-universe factors. One, for example, is the Rule of Perception: you can only add so much horrid detail to a monstrous creature before the design becomes busy and adding extra eyes, putrid tentacles, etc. just does not make that much of a visual impact anymore. The only possible way left to get the audience's attention and signal "major change" is, paradoxically, to take all the monstrous features away. Also, drawing or rendering an ever-expanding monster is taxing in terms of resources; this is a particularly important consideration in animation or sequential art, where the same thing must be drawn over and over again — so much so that in those mediums, you can probably expect the humanoid form to appear in more episodes than the monstrous form.

Subtrope of Monstrosity Equals Weakness, where more monstrous characters will be inherently weaker / less important than humanoid ones. This trope is about transformations; if a pretty person is merely the most powerful member of a rugged/monstrous group, it's The Pretty Guys Are Stronger.

Compare The Man Behind the Monsters (an exogenous demonstration of this trope), With Great Power Comes Great Hotness (when a person who wasn't necessarily monstrous to start with looks better as they gain power) and Crystal Spires and Togas (which is more or less this trope applied to entire civilizations). Contrast Eldritch Transformation, where one becomes far less humanoid as their power increases.

Not to be confused with Bishōnen Train Lines or Bishōnen, though it's certainly possible to become a Bishōnen after crossing the Bishonen Line.