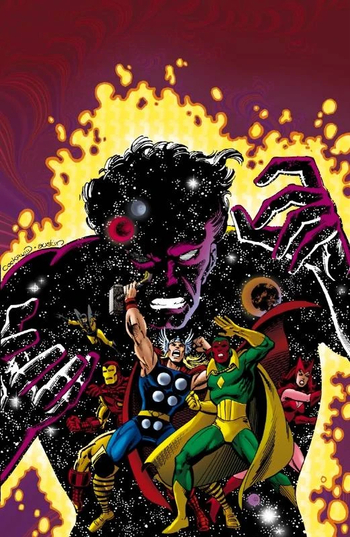 "It was not within our power to slay such a being! Accept the word of one who knows!"
— Starhawk
Advertisement:

The Korvac Saga was a 1978 storyline of The Avengers, written by Jim Shooter. It is the tragic story of Michael Korvac and Carina.

Michael Korvac was an evil cyborg from the 30th century who wanted vengeance against the Badoon, the alien race who were responsible for turning him into a cyborg. He found the ship of the legendary Galactus and began to take power from it. The alien energies gave him god like power, which he used to restore his human body. With his new power, he made an even greater plan: conceal himself from the cosmic powers and make subtle changes to reality, to end the control of Eternity.

First, some former Avengers and other people close to them begin to disappear, vanishing into thin air, such as Quicksilver and the time-displaced Two-Gun Kid. Then the Guardians of the Galaxy came to the 20th century to capture Korvac, as they believe he will attempt to erase the Guardians from existence by killing Vance Astro in his infancy. To complicate matters even further, Henry Peter Gyrich revoked the special government permits of the Avengers because of their defective security.

Starhawk, with his cosmic senses, locates Korvac immediately, and fights him alone. Korvac destroys him, and then recreates him, but with his memory of the meeting erased and incapable of ever sensing Korvac again. Korvac had also met a woman named Carina at a fashion show, and makes her his girlfriend.

The Avengers begin to investigate the disappearances, and called for all the former Avengers to return to the team. With the help of the Guardians they locate the one responsible for everything: the Collector, who was defeated by Thor, Iron Man, Hawkeye and the Wasp. The Collector explains that there was a great menace to the Cosmos, and that he sought to capture the Avengers to save them from it. He had also sent his daughter to spy for him. As the Collector explained this, Carina confesses to Korvac that she is a spy, but has fallen in love with him. Korvac kills the Collector from a distance before he could tell the Avengers who "The Enemy" was.

Everyone who had ever been an Avenger begins to search for this "Enemy". All the clues pointed to the same place: a luxurious house in Forest Hills Gardens. The Avengers arrive in Forest Hills, but only find a normal couple, Michael and Carina. Michael is revealed when Starhawk asks why the Avengers are talking to the air, indicating he could not see Michael, and is therefore the enemy they were searching for.

Michael Korvac is worried because he had worked hard to hide himself, but a fight with the Avengers would be noticed by the cosmic powers. He easily bests them, but loses the will to live when Carina doubts him and died. Then the Avengers turn against Carina, who has cosmic power as well. Although she could also defeat them with ease, she commits suicide by forcing Thor's hammer to fire against herself. Moondragon begins to cry: she had read their minds, and realized that they were not evil, that the Avengers spoiled a well-intentioned plan, and that he brought the deceased back to life before dying.

The Korvac Saga contains examples of: