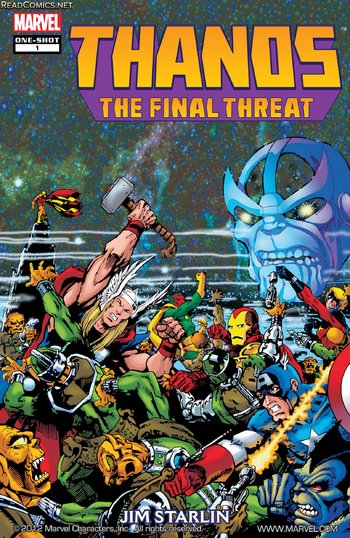 Hey! Leave some alien for that golden guy back there!
Thanos: The Final Threat is a 1970s adventure of The Avengers, with the death of Thanos, Adam Warlock, Pip and Gamora, and guest appearances by Captain Marvel, Spider-Man and The Thing. It took place in Avengers Annual #7 and Marvel Two-in-One Annual #2.
Advertisement:

The team is gathered at the mansion, and Captain Marvel, Moondragon and Adam Warlock pay a visit. They discover that Thanos has united the Soul Gems, and created a star-destroyer cannon with them. His armada shows up at the edge of the solar system, the Avengers board the main ship and defeat all the weird aliens in it. But Thanos is not there, he's at another ship, at the other side of the solar system. Warlock and Marvel leave the fight to get him, and Thor and Iron Man follow them. Thanos kills Warlock and defeats Marvel, but Iron Man destroyed his big weapon. Thanos returns to the other ship, easily defeats and captures the Avengers, and gets a new plan: use Warlock's gem to destroy the sun.

Moondragon sent a psychic SOS received by Spider-Man, who asked the Thing to lend him a ship there. They were defeated as well, but Spider-Man managed to free the Avengers. A new fight started, and Spider-Man managed to break the Soul Gem: Adam Warlock returned to life, turned Thanos into stone, and then died again.

This story provides examples of...