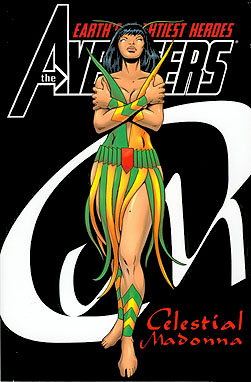 "This one is not someone interesting to talk about". Yes, sure.
Advertisement:

The Celestial Madonna Saga is a 1970s storyline of The Avengers, written by Steve Englehart. The plot is massively complex, and it is perhaps the most complex comic book plot written up to that date (and it may still give modern readers a headache).

In short, the Swordman had returned to the Avengers and brought Mantis with him, a Vietnamese martial artist. Unravelling details of her past, which was composed of fake memories, she became the "Celestial Madonna" (the perfect human being), got married with a sentient tree and ascended to a higher plane of existence. The time-traveler Kang the Conqueror tried to abduct Mantis, but he was opposed by pharaoh Rama-Tut (a future self of Kang) and Immortus (a future self of Kang and Rama-Tut); even so he attacked a second, a third and a fourth time. The Vision discovers that his body was not created by Ultron; actually he used to be the robotic Human Torch, with a changed body and new brain patterns (this became more complicated in the future...). Agatha Harkness trained the Scarlet Witch in sorcery, so she became an actual witch, and not just a mere fancy superhero name. And, as a bonus, we also learn the origin of Moondragon.

Sounds complicated? Remember that this is just the brief introductory version.

This is a comic book without any relation to the Queen of Pop.