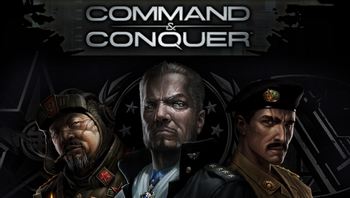 The three Generals again: older, wiser and in HD.

"Ever played chess, General? Or.. *chuckles* Do you want to play videogames?"

The [intended] sequel to the strategy game Command & Conquer: Generals, which was developed by Victory Games and entered internal beta testing in 2013. This game was intended to start a new Command & Conquer franchise, one that would've been Free to Play. It's client was also supposed to eventually gather all Command and Conquer series into a single client. However, its production was then cancelled in October 2013 by Electronic Arts. Below, you can only read what it was intended to look like:

Ten years after the conclusion of the original, the China-dominated Asia-Pacific Alliance (APA) found itself challenged on all fronts, after being the world’s foremost geopolitical power for nearly a decade. The upstart European Union, a high-tech, single-state entity with an increasingly expansionist agenda continues to flex her muscles, while a series of increasingly bloody uprisings have torn key APA and EU satellite nations asunder. Rumors point to a newly reconstituted Global Liberation Army (GLA) as the instigator, but witnesses have described technology far beyond the reach of any normal terrorist organization. Concerned, the APA dispatches an elite force to infiltrate the latest, most volatile rebellion, one targeting an EU backed dictator.

Three factions are once again slugging it out:

The available material provided examples of: