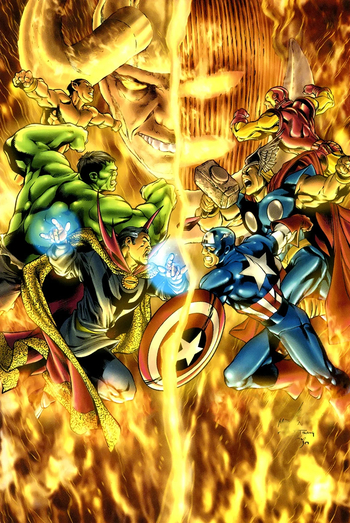 Avengers/Defenders War is a 1973 crossover between The Avengers and The Defenders.

The Enchantress turned the Black Knight into a stone statue, and the Defenders (Dr. Strange, Hulk, Namor, Silver Surfer, Valkyrie and Hawkeye, who had just left the Avengers) sought to help him. Dr. Strange communicated with the Knight's soul, but Dormammu and Loki (who was blind at the moment) change his message, so that he appeared to send the Defenders to gather the pieces of a Dismantled MacGuffin known as the Evil Eye. Dormammu wants the Evil Eye in order to merge Earth with his own Dark Dimension. Loki, fearing that Dormammu might do the same to Asgard, warns the Avengers (at the time composed of Captain America, Thor, Iron Man, Vision, Scarlet Witch, Black Panther, Mantis and the Swordsman) to stop the Defenders.

After a number of clashes over the pieces of the Eye, Captain America and Namor realize that their groups have been manipulated into fighting each other, but it's too late: Dormammu takes the united pieces of the Evil Eye, and begins merging Earth into his own dimension. But he's betrayed by Loki and defeated by the Scarlet Witch, ending the war.