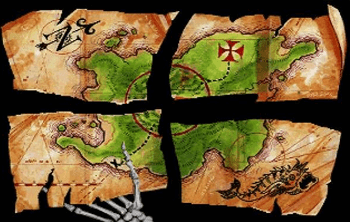 Professor: Obviously, I'll also leave that here with y... Leave... It's only logical, so that the device... So I'll leave it... Lea... I'll leav...
Professor: NO!!! I'm sorry, but the urge is too strong! I'll separate the punchcard into seven pieces and hide them deep within seven monster-infested dungeons distributed all over the country!!! Tell that to any group of people who might come asking for it...
— The B-Movie Comic

A common way to produce Plot Coupons of the "Gotta Catch Them All" variety is for the Precursors to split a powerful Ancient Artifact that was used to defeat the bad guy into three or more parts and, yes, distribute them across the world on a vague premise of it being "too dangerous to ever use again". Then, when the bad guy raises its head Exty Years Later (and it always does), the heroes must set out to reassemble said artifact.

More generally, someone has split an important object into pieces, and stored those pieces in different locations. Anyone who wants to possess the object must recover and recombine all the pieces.

If the said artifact was disassembled because it possesses an evil will of its own, this overlaps with Sealed Evil in a Six Pack. If it was disassembled because there was a good chance that evil would get their hands on it in the present, this overlaps with Fling a Light into the Future. If the assembled artifact has far stronger (and useful!) properties, it's due to the Set Bonus. If the pieces end up in the hands of different characters as they search for it, it may become a Signature Device and/or lead to a case of Two Halves Make a Plot.

Story of the Six Strings

Peppy explains to Poppy and her friends the story of the creation of the six musical strings and how the six tribes (supposedly) went their separate ways to live in isolation.

Example of:
When It All Began

Story of the Six Strings

Peppy explains to Poppy and her friends the story of the creation of the six musical strings and how the six tribes (supposedly) went their separate ways to live in isolation.