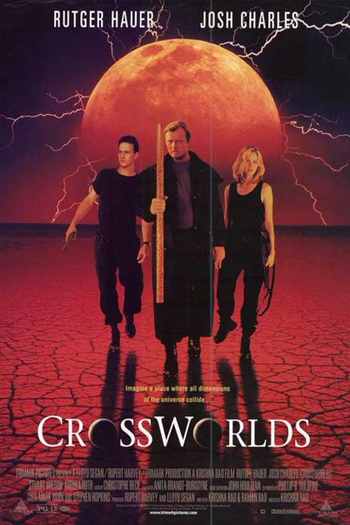 An Ordinary College Student named Joe Talbot is approached by an attractive blonde at a party, and he discovers that he has been pulled into an inter-dimensional war. An Evil Sorcerer named Ferris sends Mooks after him, and Joe finds out that a crystal pendant, left by his late father, is one of the two pieces of an ancient and powerful scepter that, if obtained by the Big Bad, would allow him to break down the barriers between The Multiverse and allow his army to take over the unified world, as they have done to his native dimension. The blonde, named Laura, and a middle-aged guy they meet named A.T. are (or, in A.T.'s case, were) members of La Résistance, who are trying to keep the crystal and the staff away from Ferris. With the fate of all the worlds at stake, it's up to Joe to find his inner courage and defeat Ferris.