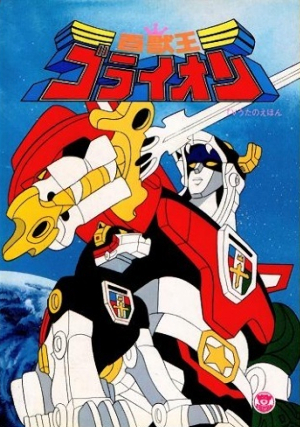 Beast King GoLion (百獣王ゴライオン, Hyaku Jūō Goraion) is a Combining Mecha from Toeinote Not Toei Animation; the series was conceived by the main Toei company, but the animation was handled by other studios, with Nakamura Productions on character designs that aired in 1981-82. The show aired Wednesdays at 6pm on TV Tokyo note Originally Tokyo 12 Channel, which became TV Tokyo in October 1981, during the show's run. and was syndicated to other stations across Japan. Since shows like this were a dime a dozen in Japan (TV Tokyo actually devoted the weekday 6pm time slot to robot anime at this time, with a different show airing each day), it unfortunately got overlooked. But elsewhere, including the US, where Humongous Mecha shows were still practically unheard of, it got recognition as the lion robot of Voltron.

The show takes place in the then-future year of 1999, and Earth has just been hit by World War III, and all the cities are nuked. Five space academy students come across the ruins, and before they even have time to grieve, they are taken as slaves by ships of the Galra Empire. They manage to escape, are nearly shot down, but are pulled in by a mysterious force from the planet Altea.

Stumbling across a ruined castle, they meet Princess Fala, the last survivor of the planet's royal family after the Galra empire ravaged the planet, and her advisor Raible. They determine that the explorers are there to pilot Golion, a robot that was unrivaled in battle thousands of years ago, but split into five lions after he tried to take on a goddess.

So the pilots form Golion, and become the protectors of Altea (including Fala herself after one of the pilots is killed), and eventually overthrow the Galra empire.

Even though the series never took off in Japan as well as Voltron elsewhere, it does have a cult following. In Italy, where the first 26 episodes aired dubbed in 1982 - two years before Voltron even existed - GoLion is arguably more popular than Voltron, although Voltron was also released in Italy in 1986, creating a Dueling Dubs situation. Also, GoLion appeared in Super Robot Wars W.